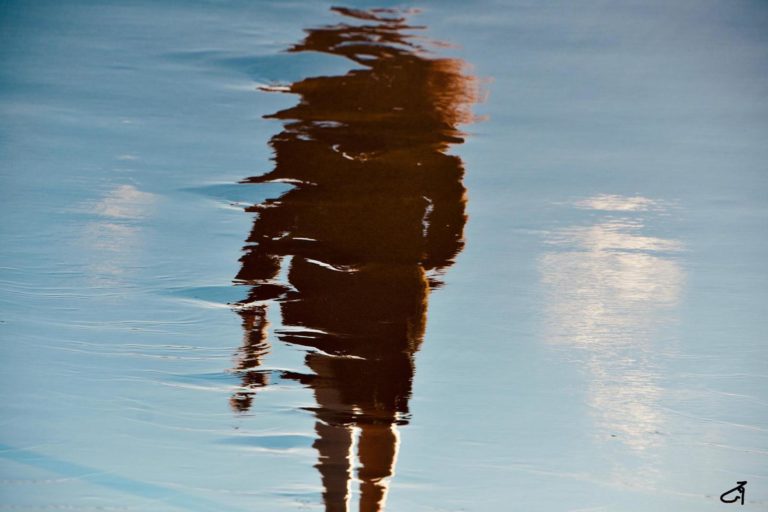 Osama Esber, born in Jableh, Syria in 1963, is a widely published author of poetry and short stories, as well as a major translator of English writings into Arabic. He currently lives in exile in the United States, where he arrived initially in 2012 as a visiting scholar at the University of Chicago. Now living in California, where he teaches Arabic, Esber continues to write and translate. He is also an editor for the Arab Studies Institute’s Tadween Publishing house and a host of Status, Jadaliyya’s audio-visual podcast. His most recent collection of poetry is entitled `Ala turuqi al-bahariyya (My Seaside Paths, Jordan: Dar Khutut wa Zilal, 2020).

I first met Osama at the University of Damascus in 1988, and I have been sustained ever since by our friendship and intellectual camaraderie. It is therefore a special pleasure and privilege to introduce the following three poems.

These poems explore how writing reattaches us to life, expressed here in the nuanced register of feelings, moods and atmospheres associated with our complicated present tense. All three poems are about the COVID-19 pandemic and exile, offering accounts of a double estrangement, an embodied loneliness marked by recurring blasts of fear and an overwhelming sense of exhaustion. Death rears its ugly head in the poems, as does an emptiness born of everyday despair. Yet, particularly in the second poem, “The Waiting Machine,” Esber also anticipates an end to the madness. Rage leads to contemplation and a sense of emancipation when the poet finds the strength to swim naked in the abyss and dreams of waking on new shores, re-moored to life.

The Wind of Fear

Something shakes the planet
throwing it into the wind of fear.

The planet was always
on the edge of the abyss.
Strange that it has never fallen.

The city streets are empty.
Death waits there
in parked cars
on seashores
on the stage
on the front pages of newspapers
in bars
in schools
in kisses and embraces
in the barking of tired dogs.
and the proclamations of politicians.

The threads of the prayer mat
Unravel
to make a face mask.
Supplication prayers
find no wood
to make ladders on which to ascend.

I am preoccupied now
with setting the table
so I can sit down at it,
me and my solitude.

The glass in front of me is full
but feels that it is empty.
My hand feels
That it is not mine.

We have become bridges
over which death crosses.
Here are our bodies, dangling, waiting
On their drooping branches.

-1-
Things come only so they can go.
If they settle, they do so as dust
until the wind comes.

-2-
In the middle of this madness
on the summit of its high mountain
for the first time
I feel that the body is a waiting machine.

-3-
A fury rises under the maple tree.
Ravens in large flocks,
gathering as if to decide the fate of the city.

-4-
When the sun rose
and light revealed the streets,
traces of wheels appeared
as if a people’s convoys had passed by this place
in this desert.

-5-
In front of Salvador Dali’s Museum
I saw a huge iron anchor
in the park.
I thought of old ships and voyages,
of world explorers
and mapmakers.
Inside me, a question arose:
Our sphere-shaped ship,
which sails dizzy
and without compass
through the shadows of the heavens,
where will it cast anchor?

-6-
And my body said to me,
“Stand against the wind,
amidst this blast.
Strip off your clothes!
Swim in this abyss,
and dream of a beach
to wake up on.”

Books of An Empty Life

-1-
The days have become billboards advertising death
in cities that do not open the doors or windows of life.

-3-
We never learned how to hold sacred our moments.
We destroyed the bridges between our bodies
and the opportunities for their birth.

-4-
In our era, the darkness is intense
we don’t see each other
or, we see in each other what we want to.

-5-
The darkness is intense in our era
we no longer see passable roads.
Who can see roads in darkness like this?
Feet slip
and tumble into a night whose every tunnel
marks the beginning of another night.

-6-
In the cities of death
we sit at tables
Leaf through life’s empty books.