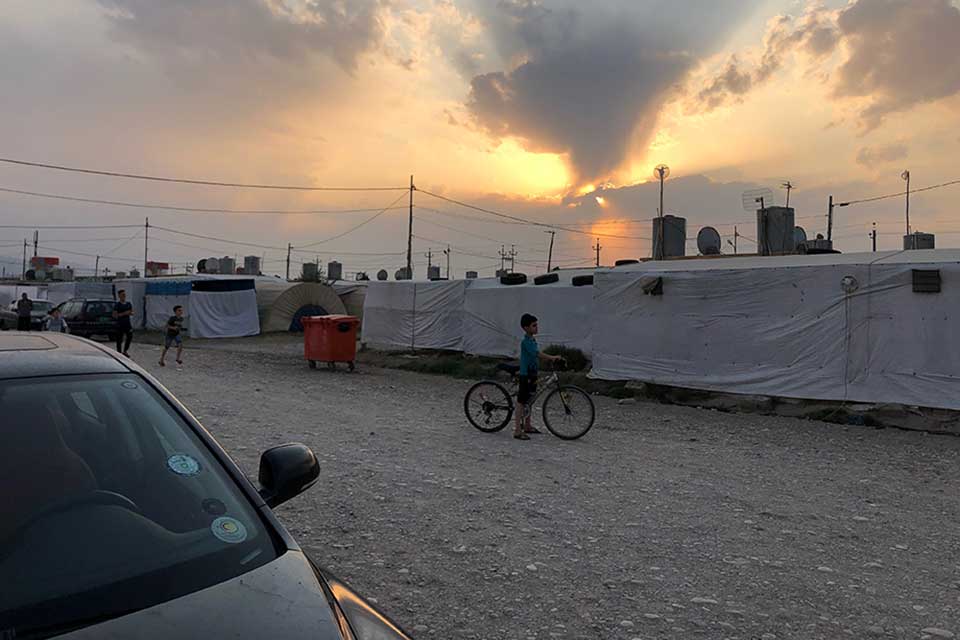 Today a fire broke out in two tents
The families shouted, the children cried and ran bare-assed from the bathroom
Still the fire extinguishers ignored their tears
And the fire was not extinguished
Do you understand now why water drips from our ears as soon as we hear screams?

The police car came, and we asked, Where is the ambulance, where is the fire engine?
The officer said, There’s no difference, the three cars scream the same
But the production of tears is your responsibility, oh IDPs!

There were no casualties, the camp manager told a local channel
What about the newborn who burned in his cradle?
It is true that he cried out once or twice but he did not produce any tears—
his eyes were not yet open
He did not hear his mother’s familiar sighs or lullabies
He had not yet endured enough pain to say he was an IDP
The journalist shouted at me: How can we write the news ticker with a lying heart:
“One person died as a result of a fire in two tents?”
What are the human losses if an IDP dies?

Translation from the Arabic
By David Shook with the author

Two Poems in an Incomplete Poem

For every fifty destroyed towns in this country, there is a poem as empty as the country.

And for every camp built, a long poem, longer than the range of a missile,
Deeper than the well of oblivion, which we never get to fall into,
Wider than Sasha Grey’s vagina, which is closer to the eyes of IDPs than anything else—
Let me tremble—
Broader than the space occupied by the stench of Safeen’s armpits.

A deeeeeep breath and I will return,
Larger than the earth,
Bolder than a tongue insulting the camp manager,
Kinder than my middle finger, which still rises toward the world whenever I hear the word “life,”
And lighter than the “hi” from a prostitute’s mouth,
Filled with more meaning than a cemetery,
Simpler than pitching a tent, more complicated than breathing in it.

Is this what you mean by fifty heads?

Featured image: A boy riding his bike near the Chamishko IDP camp in Iraqi Kurdistan, near the Turkish border / Photo by David Shook

Zêdan Xelef was born in the village of Izêr, on Shingal Mountain in northern Iraq, in 1995. Displaced from his home by the Islamic State’s attempt to exterminate the Êzîdî, he arrived with his family to the Chamishko IDP camp in late 2014. He studied translation at the University of Duhok, and his current projects include translating Whitman’s Song of Myself into Kurmanji and a selection of poets from Rojava into English. He recently moved to Sulaimani to work for Kashkul, the center for art and culture at the American University of Iraq, Sulaimani.

Poet David Shook’s most recent book-length translations are Jorge Eduardo Eielson’s Room in Rome and Pablo d’Ors’ The Friend of the Desert. Shook is presently editing a Spanish-language anthology of poetry from Shingal for the Mexico City–based publisher Gato Negro, and their new collection Atlas estelar is forthcoming in 2020.

Bryar Bajalan is an MA student in Middle East Studies at the University of Exeter, where he studies changing depictions of eroticism in the literature of Mosul before and after the Islamic State’s occupation. To the Ends of the Earth, his short documentary about nineteenth-century Baghdadi poet Jamil al-Zahawi, will premiere at the Translating Poetries Symposium this month in London.