‘To sing is not a right in the Gaza Strip’ 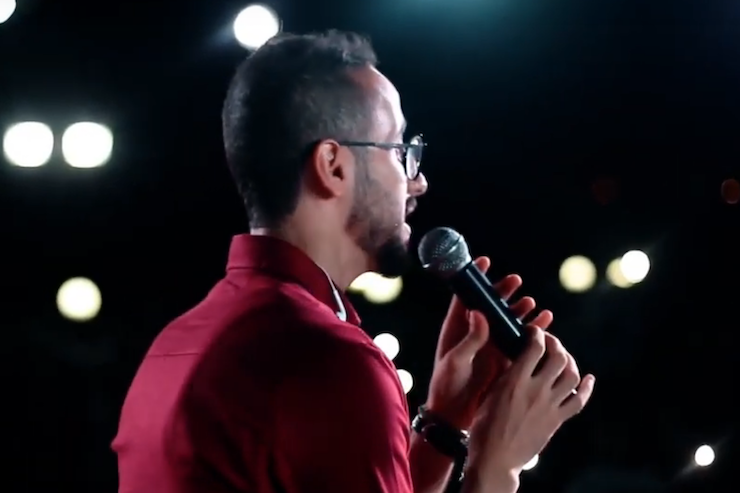 Abed Nasser, the owner of Cedar restaurant in Gaza City, broke the news to his customers in a Facebook post: the highly-anticipated music night scheduled for later that Ramadan evening had to be cancelled due to harassment and interference by the Hamas government.

According to Nasser, the police sought to prevent mixed attendance. They ordered him not to let men participate, except if they were part of a family taking part in the event. Nasser was asked to report to the police’s intelligence branch in Gaza, but he refused.

Music is increasingly becoming a way for young Gazans to channel stress and trauma — Palestinians in Gaza have had to endure violence and human rights abuses for decades, particularly since Israel imposed a blockade on the strip in 2007. But with mounting social, political, and religious restrictions under Hamas rule, opportunities for musicians are limited, as the government prevents groups and businesses that give performers a stage from doing so.

Artists who want to perform or venues that intend to host cultural events must first secure a permit. The process involves contacting at least four different authorities: the Tourism Ministry, the Public Security Ministry, the General Investigations Unit, which, among other things, acts as the public morality police, and the Abbas police station. Permits are issued depending on security and social considerations. Several businesses that have been subjected to such restrictions were contacted for this article, but refused to be interviewed out of fear of government intimidation.

A Palestinian band perform during a concert calling to boycott the Eurovision Song Contest hosted by Israel in Tel Aviv, on the rubble of a building that was recently destroyed by Israeli air strikes in Gaza City on May 14, 2019. (Hassan Jedi/Flash90)

Hamada Naserallah, a professional singer and law school graduate, said Hamas has stopped him from performing in Gaza at least 50 times. “To sing is not a right in the Gaza Strip,” said Naserallah, who performs with Sol Band, a Palestinian music group named after the fifth note of the musical scale. The eight-member troupe plays both modern and traditional Arabic music. “Suppression, humiliation, banning parties, controlling freedom — I can’t freely sing as any other singer on this planet,” added Naserallah.

Following a 2016 concert at Red Crescent Hall, police banned Sol Band from playing for two years, because women and girls in the audience were clapping and singing along with Naserallah, he said. Nowadays, a police officer is stationed at each of his concerts, supervising his song list and interactions with the audience. “I remember the police once threatened to kick me off stage if I sang ‘love songs,’” he remarked.

Sol Band had the opportunity to perform at the Palestine Music Expo in Ramallah in April. For Naserallah, it was the dream of leaving Gaza come true. Leaving Gaza is expensive and requires a difficult-to-obtain permit, and Israel forbids almost any travel between the West Bank and Gaza for Palestinians. For Naserallah, this was also a chance to experience singing on stage without government supervision or censorship; Ramallah is relatively more liberal than Gaza.

The Palestinian community in Gaza was largely traditional and conservative “long before Hamas seized control in June 2007,” Mkhaimer Abu Saada, a political science professor at Gaza’s Al Azhar University, wrote in 2010. But since Hamas took over the strip, it has intensified its efforts to force conservative interpretations of Sharia rules, also regarding social life in the strip.

In a request for comment, Gaza Police Spokesman Ayman Al Batniji said the authorities only prevent parties that “encourage abnormal mixing” between the sexes. The police ban gatherings that can harm the community’s values, he added, stressing that Gaza is a conservative society. People or businesses that were prevented from holding a party have had previous issues concerning public morality with the government, said Batniji, but otherwise the authorities do not ban people from performing or hosting cultural events.

According to a study by the Palestinian Center for Policy and Survey Research that looked at Hamas’ governance in the strip from 2011 to 2015, Hamas has informally allowed for more liberal approaches to exist in parallel to its conservative rule. For example, Hamas encourages the separation of sexes at schools and universities, but it hasn’t officially enforced that. Based on the findings of that same report, however, Hamas has shown “little tolerance for mixed attendance at cultural activities, especially those involving music, dancing, and singing.”

The social restrictions are taking their toll, so much so that Sol Band has given up on performing in Gaza. Instead, they decided to cultivate an audience on social media by releasing videos on Instagram and Facebook. Yet even that becomes difficult, says Naserallah, since Hamas does not allow musicians in Gaza to film videos of themselves singing or playing an instrument in the street without first securing a permit with the Interior Affairs Ministry — not even for an Instagram story.

Three of the band members have already left Gaza for good due to the lack of freedoms and opportunities to develop their music careers there. One of the younger members, 16-year-old Rahaf Shamaly, is prohibited from singing on stage as well as at restaurants and cafes in Gaza, simply because she is a woman. Last year, police banned Shamaly from performing at the Jazz Journey in Palestine held by UNESCO in Gaza.

“I live in a conservative community where culture and traditions are controlling the people. Gaza is not used to a female singer among male musicians,” said Shamaly. She believes that she doesn’t have a future as a singer in Gaza due to these restrictions. Like many Palestinian youth frustrated with the various layers of oppression, surging unemployment, and restrictions on freedom, she plans to leave the strip after she graduates high school.

Hind Khoudary is a reporter based in Gaza.