Turkey: A vindictive and pitiless regime 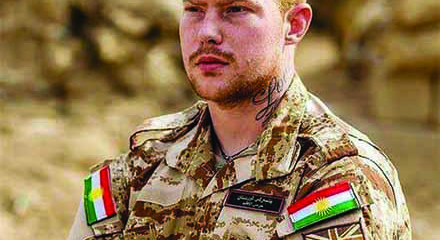 The Turkish army of the modern republican era has never withdrawn from any piece of land it has occupied on whatever pretext.

A former British army veteran who briefly served as a combat medic with the Kurdish forces defending Kobanê against Islamic State in 2015 has been sentenced to seven years and six months imprisonment. Joe Robinson, 25, was detained in a resort town on the Aegean coast in the summer of 2017. After a lengthy trial he was convicted of being a member of a terrorist organisation.

After taking part in fighting in Syrian and then Iraqi Kurdistan for five months, Robinson returned to Britain, and he was promptly arrested at Manchester Airport. After a 10-month-long investigation he was released without being charged. Most probably he had developed a false sense of security following this, and decided it was safe to travel to Turkey for a holiday. He had not realised – or simply could not comprehend – that Turkey is headed by a vindictive regime that never forgets. It has been waging a war of conquest along its southern borders, and must punish those who stand opposed to its aims.

One expects that those foreign fighters who joined the International Freedom Battalion to defend Rojava alongside forces of the Democratic Union Party (PYD) against the onslaught of IS have had first-hand experience of what Turkey is capable of doing. But perhaps some lessons need to be learnt the hard way. So far eight British IFB fighters have lost their lives for a cause they believed in deeply. Their ultimate sacrifice – and those of all other IFB fighters in defence of democracy and freedom against all the odds – reminds me of the glorious traditions of the International Brigade in Spain, when Hitler’s regime provided military aid, including air support, to Franco’s fascist forces.

In Rojava and Iraqi Kurdistan the same role has been played by Turkey – with the financial support of the Gulf regimes. All armed Islamist groups were trained, supplied and armed by Ankara from the very start of the Syrian revolution. Their freedom of movement through Turkish territory was secured and all medical services, including subsequent recuperation, were provided in Turkey. Who could forget how the spokesman for the Turkish regime smirked while he boasted about Kobanê’s imminent fall?

IFB fighters joined the war without hesitation, despite the fact that the odds were stacked heavily against them. Each of them assumed a Kurdish nom de guerre, which was very relevant to the struggle. They were part of the legendary defence of Kobanê, which has since been instilled in the memory of all progressives in the middle east, if not the world.

The IS defeat in Kobanê and successive victories in the later stages was such a blow to the Turkish regime, it could not forgive or forget. The pitiless nature of the regime in its long-drawn-out fight against the Kurds is well known, but its failures on the ground, combined with its pitiful standing in the international arena, has guaranteed its vindictiveness against anybody who supports the Kurds.

The regime’s spokesmen and their mouthpieces in the press have been attacking everybody – starting with the United States and the European Union, through to Amnesty International and the international media, down to various religious missionaries – and try to portray them all as enemies of Turkey because they do not toe the government’s line on Kurdistan. Any opposition is treachery.

Even the financial crisis brought about by the government’s own incompetent polices is explained away to the people as an attack organised by foreigners wanting to stop Turkey’s mercurial progress. The xenophobia is pumped up under the guise of anti-imperialism.

Journalists who have exposed Turkey’s involvement in clandestine arm shipments to Syria have been harshly treated. A former editor of the nationalist daily Cumhuriyet was sentenced to imprisonment and, despite the fact that he is an MP with parliamentary immunity, has not been released. Another journalist fled the country and has been unable to return, while many others have been locked away for long periods while awaiting trial. Thousands of members of the press are now in jail. The same goes for academics, teachers and students.

In this atmosphere the incursions of Turkish armed forces into Syria and the continuing campaign in Iraqi Kurdistan have raised the bar. Domestically manufactured ‘unmanned aerial vehicles’ carrying domestically developed precision missiles are being used indiscriminately. Aerial reconnaissance covers what are continuous air raids on Kurdish areas, not only across the border, but within Turkey itself.

In Iraqi Kurdistan, Turkish armed forces have built 11 bases along the routes connecting the Qandil mountains to Turkey’s borders. The stated aim of ‘denial of area control to the Kurds’ is the phrase used to justify the continued occupation of Iraqi territories. The area under Turkish control extends 25 kilometres into Iraqi territory. Of course, there is no independent confirmation of this, since nobody but officially sanctioned journalists are allowed in the region.

Meanwhile, the propaganda machine of the Turkish state claims every week that yet another key leader of the Kurdish guerrilla forces has been killed – such claims must now have reached more than one thousand. And so-called “security zones” declared within Turkey itself have meant that people living in those areas have been unable to return for months. Once again no independent journalists are permitted during military operations. And forest fires caused by the bombing have raged without any attempt to extinguish them.

In almost every major city in the western part of Turkey leaders and cadre of the People’s Democratic Party (HDP) are being detained on terrorism charges. Anti-American sentiment is encouraged on the pretext that the US is supporting the formation of a Kurdish zone along the southern border. And the government has claimed success through the occupation of Azez and Afrin. Meanwhile, there is the building of 11 so-called observation posts in Idlib – military units are actually stationed there.

To date, the Turkish army of the modern republican era has never withdrawn from any piece of land it has occupied on this or that pretext, beginning with the ancient Antioch province of the Ottoman empire. It had fallen under French occupation after World War I, but was occupied in 1938 and then incorporated into Turkey. Then northern Cyprus was invaded in 1974 on the pretext of saving Turkish Cypriots from a massacre and, while a shambolic ‘independent’ state was declared there in 1983, the Turkish occupation is ongoing after a quarter of a century. With rich pickings awaiting prospectors of underwater oil the Turkish regime has no intention of quitting the island.

Turkey’s claims on Greek territory are also ever present. President Recep Tayyip Erdoğan has been open in his desire to rewrite the Lausanne Treaty – the basis of the peace settlement following World War I. The airforces of Turkey and Greece – supposed partners within Nato – ended up firing on each other after weeks of mock dog-fights over the Aegean Sea. Eventually international pressure forced them to pull back.

The regions of Mosul and Kirkuk in Iraq, together with the Antioch province of Syria, have been considered Turkish property since the swearing of the national oath in the first assembly of nationalist forces in 1919. There is a never-ending desire to dominate those regions – in fact the free movement granted to IS and its occupation of Mosul were facilitated on the same grounds.

Therefore those like Joe Robinson cannot be tolerated by the Turkish regime.