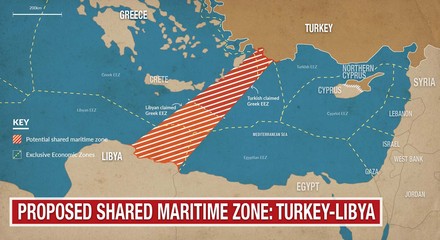 The ever increasing expansionist policies of Turkey have recently extended across the Mediterranean Sea and reached to the shores of North Africa. The Turkish bourgeoisie, especially construction companies, had been quite active in Libya during the reign of Muammar Gaddafi. However, since 2011 they have been unable to operate on Libyan soil. Many a construction project was left unfinished and there are hefty sums still due. The government in Ankara has tried to get hold of the money, so far unsuccessfully.

Nowadays, those disputes have been put on the backburner, because of the changed situation in the eastern Mediterranean. The traditional friends of Turkey in the region, Egypt and Israel, are aligned with Greece and Greek Cyprus to counter Turkish expansionism into their backyard, resulting from the disputed boundaries of the respective exclusive economic zones (EEZs).1

The adjacent Israeli and Egyptian natural gas fields near the EEZ borders are already in operation and undersea pipelines have been laid to connect the offshore wells. Undersea exploration has continued and an oilfield in the Cypriot EEZ was discovered. That is when all pandemonium broke out.

The Greek Cypriots have argued that Turkish Cypriots have no say on matters related to a gas field to the south of the island. Turkey, however, assuming the mantle of the protector of Turkish Cypriot interests, claimed that nothing could be done without its agreement. It started its own drilling operations and ensured heavy naval protection.

Such bullyboy tactics caused the Israeli, Egyptian and Cypriot governments to come together with Greece to adopt a common position. They started planning an undersea pipeline to Europe, challenging Turkey’s aspiration to become an energy hub for Europe, with gas pipelines coming via Turkey from Russia, Azerbaijan, Iran and Iraq.

The Greeks have long argued that the disputed part of the Mediterranean EEZ belongs to them and that Turkey can dip its toes only into the section between the Aegean Islands and the mainland. Turkey’s position is that various islands and small rocky outcrops are not part of an exclusively Greek zone – the disputed EEZs reach into the middle of the Aegean Sea, after all. As may be recalled, the fate of such a pair of rocky outcrops brought Turkey and Greece to the brink of a shooting war in 1996.

These arguments have been part of other wider disputes, such as over international ‘flight information regions’ for the aviation industry, and the demilitarisation of islands. Those disputes were put aside temporarily under pressure from the US and Nato, but they were not forgotten. However, the dispute over the EEZs in regard to the waters between Crete and Cyprus has become pivotal if there is to be a pipeline bringing eastern Mediterranean gas to Europe.

While international attention was focused on the Balkans and the Black Sea, suddenly came the bombshell: Turkey had unexpectedly signed an agreement with the United Nations-recognised ‘Government of National Accord’ in Libya on the EEZ between two countries. According to the agreement, there is a maritime link between Turkey and Libya, and their associated EEZs over the Mediterranean cut through the sea between Crete and Cyprus.

That agreement came as a spanner in the well-oiled Israel-Egypt-Cyprus works over their project to build a pipeline. Nor has the European Union been pleased. The new map of the disputed Mediterranean EEZ hands Turkey a massive portion of the Mediterranean.

And another factor has now come into play. With the Turkey-GNA agreement Turkey has intervened militarily in the ongoing civil war in Libya. It became apparent to ordinary folks here in Turkey that president Recep Tayyip Erdoğan has already supplied Turkish produced drones to the Tripoli government. Now there are reports of thousands of Turkish financed Syrian mercenaries being airlifted to Libya. Turkey itself has sent 35 ‘advisors’. The Syrian National Army fighters are on six-month contracts with the GNA but are clearly acting as Turkish proxies.

In other words, after interventions in Iraq, Syria and Qatar, Turkey is now jumping head-first into yet another quagmire. Libya was previously considered the backyard of Italy and France. Now an outsider has moved in to alter the balance at a time when the forces of Khalifa Haftar’s Libyan National Army seemed to be gaining the upper hand in the civil war.

Amongst the factors motivating Turkey’s challenge is Islamist politics. While Egypt was close to Erdoğan’s heart after the formation of a Muslim Brotherhood government, the military coup changed everything.

Egypt and the United Arab Emirates are the prime supporters of Haftar, while the Tripoli-based government is a Muslim Brotherhood-run show. In the seesaw of the civil war, Haftar’s forces made substantial gains and appeared to be on their way to capturing Tripoli.

The Muslim Brotherhood in Libya is associated in the minds of many with the Salafi Islam preached by al Qa’eda and Islamic State. However, another variant – the Madkhali Salafis2 – has been active within Haftar’s forces. Madkhali Salafism has been supported by Saudi Arabia and it aims to eradicate all rival religious and secular groups. They were associated with Gaddafi’s security apparatus, and since then some of their most prominent figures are known to have been involved in atrocities perpetrated against their opponent, such as the summary executions of detainees.

The efforts of Turkey to entice Russia into pursuing a separate peace process between the two governments, meanwhile excluding the EU, came to nothing. Haftar rejected the agreement. Turkey would not agree to withdraw its forces and support his government.

So what to expect? In the short run, Turkey’s involvement in Libya could be stepped up in order to further assist the Tripoli government and reverse the advances of LNA forces. More military personal and material could be channelled into Libya. Perhaps Turkey’s modern tanks will be put to the test.

Such a costly exercise – along with ongoing involvement in Iraq, Syria and Qatar, to say nothing of the dirty war against the Kurds, could have a devastating effect on the Turkish economy. It is not exactly in good shape at the moment. The burden is already being shouldered by the working people. An increase in taxation and inflation will surely eradicate the tenuous support that Erdoğan’s AKP government enjoys. That despite the pumped-up military and nationalist fervour.

The Turkish position vis-à-vis the US and Nato in the region has been changing over the last decade. Many disputes have come into the open. And surely there are more to come. Any challenge to US-Nato domination in the region has been kept on a low key, but, as the crunch point approaches, we should expect a deterioration in Turkey’s foreign relations.

Accepting the diplomatic dictates of the US or the EU would be the end of the Erdoğan government. Its only chance is to continue with brinkmanship. But, as a result, while Turkey’s internal tensions have been held in a straightjacket, they may suddenly explode and produce an altogether different dynamic.