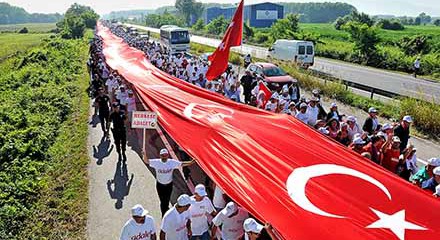 Kemal Kılıçdaroğlu decided on his ‘Justice’ march in response to the 25-year jail sentence imposed on Enis Berberoğlu, one of the Republican Peoples’ Part (CHP) MPs for Istanbul and wrong-footed the Kurdish freedom movement and the left.

In mid-May, some commentators saw only doom and gloom in Turkey, which, they believed, was rapidly sliding into the hell-hole of fascism. Others saw that despite the increasing oppressiveness of the regime, there was massive discontent that could provide a way out. As I wrote in May, “The left, together with the Kurdish freedom movement, could, and should, draw up a democratic programme aimed at uniting the progressive opposition – or at least bringing their respective movements into parallel motion.”1

While the Kurdish freedom movement and the left failed to act within that perspective, the Republican People’s Party (CHP) – the traditional party of the state elite disguised as ‘social democrats’ – has acted boldly and in a way that was completely unexpected. On June 15, the 69-year-old leader of the CHP, Kemal Kılıçdaroğlu, began a protest march from Ankara to Istanbul – over 400 kilometres. He carried a simple placard, bearing the single word, “Justice”, written with red letters on a white background. There were no political symbols, including that of his own party, no flags, banners or slogans.

He did not call on others to join him. He simply set out and, day by day, the numbers walking alongside him gradually increased. He asked everybody to respect his wish not to display any ‘divisive’ symbols, march behind that simple, one-word slogan. He and his followers did just that, marching through searing heat, as well as the occasional storm.

Gradually the movement caught the public imagination. Local grassroots organisations sprung up across Turkey to support or participate in the march. They forced the old machinery of the CHP – creaking at the seams and joints – into action.

The nationalist-Kemalist left, such as the June Movement (Haziran Hareketi), the remnants of Freedom and Democracy Party (Özgürlük ve Demokrasi Partisi) and several fragments of the now defunct Communist Party (which traditionally stood apart from CHP, while always trailing behind it, also joined in.

The pro-Kurdish HDP (People’s Democracy Party) and its allies in the Turkish left procrastinated in the face of the inclusive rhetoric of the CHP leader, fully aware of its nationalist-Kemalist anti-Kurdish history. They failed to act decisively at the very beginning, by joining in enthusiastically, for example. Consequently they lost the chance to leave their imprint on the march or challenge the nationalist-Kemalists. When the HDP leadership eventually joined, the whole operation was clearly running according to CHP factory settings. The HDP was a mere symbolic appendage in a now blatantly nationalist-Kemalist demonstration.

Until July the magic formula of success was maintained. But by then the nationalist-Kemalist medium of the CHP was looking for something more political than the simple slogan, “Justice”. A giant Turkish flag was brought in and forced upon all those taking part. The march was now dominated by the flag-waving nationalist-Kemalist secularism of the CHP with all its anti-Kurdish connotations.

However, it achieved its principal aim: to unite behind the leader of the CHP the mass of those who had voted ‘no’ in the constitutional referendum called by president Recep Tayyip Erdoğan in April. The lack of a clear agenda on how to achieve “justice” – or even any idea of what to do after the march ended – was apparent, but the CHP has managed to channel public anger behind itself, and so keep discontent under control.

The rally to be held at the end of the march was to be the magnet that would attract hundreds of thousands. However, the CHP was determined that the protest should end without any unwanted “disturbances”. Kılıçdaroğlu claimed that the security forces had been instructed only to allow “Justice” placards, Turkish flags and “posters of Mustafa Kemal Ataturk” into the meeting and insisted that no slogans other than “Rights, law, justice” would be chanted. He further insisted that he would march alone into the square where the rally would be held.

The march and final demonstration succeeding in winning international publicity for Kılıçdaroğlu. The Guardian and New York Times even published articles written by the CHP leader.2 The international media stressed the significance of a movement of mass opposition in Turkey making such a sensational impact without resorting to violence. As for Turkey’s own media, it is under strict control. Most outlets controlled by Erdoğan’s AKP (Justice and Development Party) or coerced by the government acted as if no march was taking place – or tried to downplay it when the story became impossible to suppress. The Istanbul governor’s office put out a press release claiming that only 175,000 people had gathered for the final demonstration – a gross understatement. Such blatant untruths are commonplace in Turkish official parlance, as well as in the ‘pooled’ media (top businessmen were coerced into contributing to a fund that pooled the support for AKP-supporting outlets in return for lucrative governmental contracts).

However, much of social media, as well as some of the few remaining independent outlets, supported the march to great effect. But there was no real means to hear from dissenting voices or discuss the way forward. The opposition was railroaded into supporting the CHP leadership despite its reservations and there was no opportunity for any positive input.