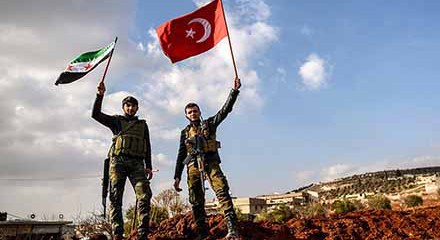 After the surrender of Afrin, Esen Uslu says that the Turkish left and Kurdish movement must unite in opposition to Erdoğan.

The People’s Protection Units (YPG) had been defending Afrin province – an isolated Kurdish-controlled pocket in northern in Syria – for nearly two months against attacks on three fronts. Facing the superior firepower of Turkish long-range artillery, tanks and airforce – not to mention the Free Syrian Army militia supported by the Turkish army – YPG forces had been gradually withdrawing towards Afrin town.

Everybody expected a protracted last-stand resistance in Afrin town from the YPG, which had fought for every pre-prepared or natural defensible position as far as it could, despite suffering heavy losses. It had enjoyed widespread support from the Afrin population and had prepared solid defensive structures. But trying to resist in an encircled town would have ended in a glorious defeat – and caused devastation to the city and its population (the Turkish propaganda machine had accused the YPG of attempting to stop civilians leaving in order to use them as ‘human shields’).

The YPG command preferred to evacuate the civilians and withdraw to fight another day, reverting to guerrilla tactics. The administration of Afrin held a press conference and its statement read as follows:

During 58 days of attacks, our people and fighters mounted great resistance against Nato’s second largest army. The whole world should know that our people and fighters resisted this savage force with strong will … In order to avoid a big humanitarian disaster, we have decided on the evacuation of civilians from the city … The war has moved to another stage, with new tactics to prevent the massacre of civilians and deliver a blow to the gangs. Our forces are deployed everywhere in Afrin and they will inflict a blow on the invading Turkish army and its gangs in their own base.1

But the surrender came as a surprise to many. The Turkish foreign minister had given a deadline for the capture of Afrin town of the end of April and had expected prolonged close-quarter battles. In addition the loyal opposition in the Turkish parliament had been asking president Recep Tayyip Erdoğan not to attempt to capture Afrin because of the likely high rate of casualties.

Among the Turkish left a chorus of ‘They should have fought to the last bullet’ was heard following the initial disappointment, until people recovered their senses. However, a new wave of ‘criticism’ has now been directed against the YPG: since the disproportionate power of the Turkish armed forces had been known from the start, why did the YPG decide to defend Afrin and accept such a high rate of casualties in the first place?

That would only be an apt criticism for those who believe that battles can be lost or won without actually fighting. But the Kurds have been forced to fight battles with the odds stacked against them for centuries. Every defeat gives their cause more and more credibility and garners support from every corner of the world.

Of course, the loss of Afrin is a severe blow to Rojava and the Kurdish freedom movement as a whole, but it has also opened a new phase in the ongoing civil war in Syria.

The international deal seemed to be to let the Syrian regime capture eastern Ghouta and allow Turkey to take Afrin. That may be part of the plan to bring the Syrian civil war to a quick end, but it will lay the foundations for further conflicts in future. The Islamist jihadist forces operating in eastern Ghouta will probably be allowed to move more or less intact to the Turkish-controlled Idlib/Afrin zone – where they could play a role in the Turkish drive against the Kurds. So the jihadist forces that fought against the Syrian regime would now be operating against the Kurds.

Turkey now dominates the Afrin and Idlib provinces and controls the Free Syrian Army, as well as the al-Nusra Front and other jihadist militias operating in Idlib. It has established several ‘observation posts’ between Idlib and the Aleppo-Homs line controlled by the forces of Bashar al-Assad. Most probably part of the deal is an end to the fighting along that corridor.

Under the Turkish-Russian agreement struck in December, a limited section of Syrian airspace over Afrin was opened up to the Turkish airforce, and now Kurdish forces have withdrawn further south behind the demarcation line around Tel Rifaat. Although it would have been very tempting for the Turkish airforce to attack YPG forces while they were withdrawing, they did not do so to avoid Russian opposition. Now the occupying forces will establish checkpoints on the road from Afrin to Tel Rifaat and that will be the limit of their action until the cards are reshuffled.

Russia has allowed Turkey such liberty so as to bring it into a more open conflict with the US. Turkey is at loggerheads with its traditional ally, as it had been cooperating with YPG forces in its fight against Islamic State along the border between Syria and Iraq. While Russia has held back Turkey’s foray into Syria at Afrin and Idlib, it has allowed Turkey to push towards the east, to the areas west of the Euphrates river, and then beyond. The Russian tactic reminds us of the infamous nod-and-wink support of western powers for Nazi Germany’s Drang nach Osten (drive to the east) before World War II.

The Turkish regime is now preparing to attack Manbij and Sinjar. It is trying to obtain the cooperation of the Iraqi regime as well as the Iraqi Kurdistan region to that end. However, Iraq does not seem keen to take part in such an operation at present – it still wants Turkey to withdraw its forces currently occupying the Beshika base in Iraq without the consent of the Baghdad government.

The parliament in the Iraqi Kurdistan region is indignant because of Afrin. The governor of Sulaymaniyah has announced that Kurds in northern Iraq will hold a three-day period of mourning. However, Turkey has ample opportunities to drive the wedge placed in the cracks between the PKK and the Iraqi Kurdistan region. We should expect the unexpected.

The US has about 2,000 troops in Rojava and it cooperates closely with the YPG. It has clearly stated that it will not support any Turkish adventure there. However, the Trump administration’s foreign policy is in disarray and the sound coming from the military on the ground is conflicting with that from Washington. The Kurds have just had a bitter experience at the hands of ‘the international community’ in regard to Afrin, so they are bracing themselves for further negative actions.

The surrender of Afrin has caused many within the Kurdish freedom movement who support separation to speak out. For example, the former mayor of Diyarbakir in south-east Turkey has said that the policies pursued by the government now leaves the Kurds no option but to go it alone. He added that the Turkish people as a whole must reject the Erdoğan regime and learn the lessons of the Ottoman empire, which ended up losing all its territory in the Middle East to the British and French.

However, such appeals to the imperialist and expansionist appetites of the Turkish people are unproductive. The Kurdish freedom movement must reach out to the Turkish left as whole, calling on it to promote a programme of democracy, equality and justice, as Abdullah Öcalan, founder of the Kurdistan Workers Party (PKK), has stated. With moves afoot to make Erdoğan president in perpetuity, the need for such a common programme and common action is now more pressing than ever.

The 2019 elections could set the seal on Erdoğan’s one-man rule unless a strong challenge is mounted. The justice system has already been turned upside down and brought judges and state prosecutors under the control of the president – even the constitutional court has been unable to get its decisions implemented.

Last summer’s large march for justice is now a distant memory, with the CHP opposition party having been brought to heel under the pretext of ‘supporting our armed forces, come what may’. So now the Kurdish movement and the Turkish left must take advantage. Prejudices against the People’s Democratic Party (HDP) must be put to one side and the opposition must unite on an anti-Erdoğan, anti-jihadist platform for democracy.