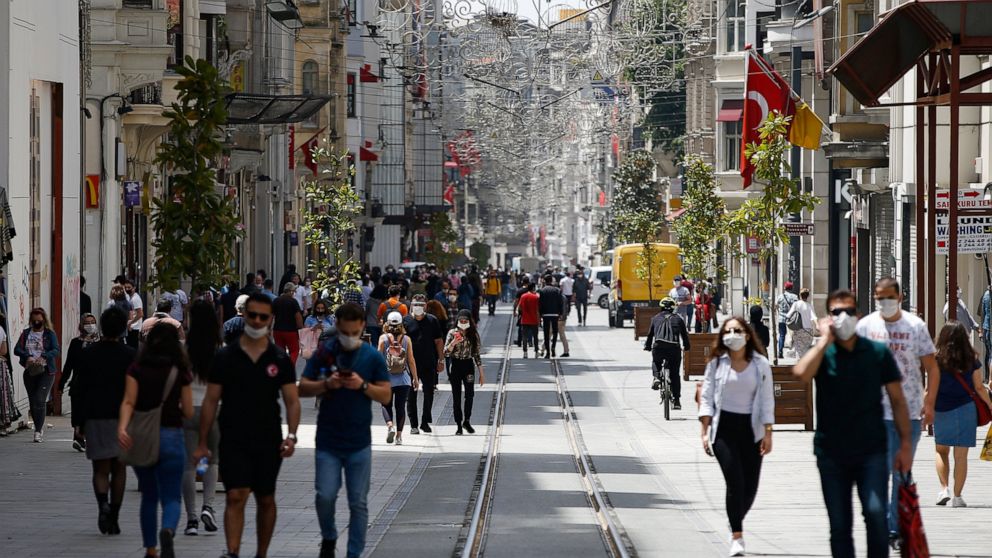 Like most governments of the world, Turkey’s was caught unawares by the Corona pandemic. Even in late March it was still hoping that the tourism season would not be completely written off, while export-oriented industries, such as automotive and clothing, would suffer just minor setbacks, from which they would soon recover. Until things became untenable, Turkish Airlines kept operating its international flights.

The pandemic came at an inopportune moment for president Recep Tayyip Erdoğan: public health infrastructure was going through an overhaul and most state-owned hospitals were being closed down – the new ‘city hospitals’, aimed at centralising all services in a few large complexes, were still being built. The private health sector was ill-prepared to deal with a mass influx of new patients: that is, ordinary folk who could not meet the top-up payments required for medical bills far exceeding the government’s fixed-payment schedules – especially for intensive care and long-term hospital treatment.

When the government realised that letting ‘herd immunity’ develop at its own pace was impractical – it would have overwhelmed the health infrastructure – a series of rash and uncoordinated moves were made. In Istanbul the ongoing hospital construction was accelerated to admit patients quickly. But the actions of the government and local authorities were not on the same wavelength – new roads giving access to the sites were not scheduled for completion until much later, and who would pay for them had not been determined.

In Istanbul the building of two pandemic hospitals on either side of the Bosporus was hastily begun. But they will not be ready until the end of May, so, despite all the fanfare, they obviously have not alleviated in the slightest the dire situation currently faced by the health service.

Neither was the textile industry ready to meet the demand for personal protective equipment for the health sector, let alone face masks for the general public, even though directives had been issued for people to wear masks in public. For weeks and weeks there were new initiatives, which it was claimed would ensure face masks were distributed – through pharmacies, then through the Post Office, and eventually by the police, who would apparently deliver them to homes, together with a “presidential gift” of a bottle of Eau de Cologne perfume – but despite all that it was still almost impossible to find any masks.

Meanwhile the government tried to earn some international brownie points by sending plane loads of PPE to several other countries, including Britain, as well as those considered in its intended spheres of influence in the Muslim world and Africa. But, as readers will know, a small mishap happened in relation to PPE deliveries to the UK: the face masks delivered were totally substandard.

Despite closing schools and banning gatherings, shopping and eating out, the government was unwilling to declare a general lockdown. While a few feeble voices from within the ranks of the left demanded this, the majority opposed the idea, believing that calling on a rightwing regime to implement such a lockdown was tantamount to surrendering before it. Even today, when it is quite apparent that the right wing everywhere is draping itself in the colours of liberty and demanding an end to the lockdown – and associated ‘socialist’ measures, such as rent and credit repayment deferrals, or food parcel deliveries to the needy – the left is still mumbling out similar demands.

The government ordered the 65+ and -16 age groups to stay at home, while expecting others to work from home if they could or go on unpaid leave (no Turkish term for ‘furlough’ has been introduced yet). Schoolchildren are supposed to be receiving online education, despite the totally inadequate internet infrastructure. As the web has been deemed a very dangerous tool in the hands of its enemies by the repressive regime, there has not been a penny spent on fibre-optic facilities for years, and it is only available for major corporations and newly built neighbourhoods, such as gated communities. Wireless internet is very expensive, and most students – even those studying in prestigious universities – do not have a suitable laptop or internet connection at home.

Weekends and public holidays in April and May were declared lockdown days. However, apart from that, normal economic activity continued, although the retail sector was suffering badly, as shopping centres were closed down. The government did offer subsidies to meet part of the wages bill, if workers were kept on the payroll on a part-time basis for a certain period. Court actions were suspended to relieve the pressure of debt repayments, and so on. Income tax and state insurance payments were deferred. And a one-off payment of 1,000 lira (approximately £150) was announced for those who lost jobs and had no means of support.

However, implementing such meagre measures was difficult for the government, as it has been attempting to keep the exchange rate artificially within its own targets since last year. Despite those efforts, which have resulted in a substantial reduction in foreign currency reserves, the downward spiral of the Turkish lira against the dollar and euro has continued. The ‘independence’ of the central bank is no more – it has been converted into a tool jumping to Erdoğan’s orders. The clumsy attempts to maintain appearances by publicly declaring ‘war’ against international usurpers, while negotiating foreign currency loans behind the scenes, did not help. Financing crisis management became a major headache for the regime, and it will continue to be one.

The indecision which lies behind the pretence of acting decisively has resulted in a shambles. The first weekend of lockdown was declared late on the Friday evening by the minister for interior affairs, who, it seems, had not engaged in proper consultation with the health ministry. People panicked and rushed to the shops to stock up for the weekend, while ‘social distancing’ rules were totally disregarded. Following the uproar that resulted, a bitter Süleyman Soylu, the interior minister, announced his resignation and left Ankara. As he has been the lead hawk in the president’s cabinet running the ‘anti-terrorist’ campaign, he was considered indispensable by Erdoğan, and his resignation was not accepted.

The coherence of the government, and of the governing coalition, were tested to the limit when a partial amnesty and the early release of prisoners were announced. Under the pretext of overcrowding being conducive to the spread of the virus, former leaders and present-day darlings of the nationalist-fascist right wing were released by Erdoğan to placate his far-right coalition partner, the Good Party. While ordinary criminals were released, that did not apply to Kurds, intellectuals and other opponents of the regime. However, even for the rank and file of Erdoğan’s Justice and Development Party all this was too much.

The numbers game – or so-called contagion ratio and mortality statistics – has become a part of daily propaganda of the media. According to the official line, Turkey is ‘winning the war’ against the virus. But all the lies and fairy tales cannot hide the horrible truth – everyone knows that the actual death toll and current danger is far greater than the regime would have you believe.

The cement holding together this shambolic government seems to be its recent successes in Syria and Libya. The major offensive of the Syrian regime to open up the main highways in Idlib province was halted by the Turkish air force, using long-distance air-to-air missiles without itself entering Syrian airspace. But the Turkish army poured in, establishing a stronghold north of the M4 and west of M5 highways, although the previously established ‘observation points’ are still in place in the Syrian-controlled zone, protected by Russian military police.

A tentative agreement was reached with the Russians, on condition that the M4 would remain open, patrolled jointly by Russian and Turkish forces. However, the Islamist militias were adamantly opposed to such joint patrols, testing the resolve of the Turkish forcers by blocking and even firing on them. However, the temporary truce now seems to be holding, giving ample opportunity to the Islamist militias to enlist mercenaries (mostly of Arab and Turkoman origin) to be sent into Libya.

‘Let dog bite dog’ is an ancient saying in the Middle East. Turkey has trained around 7,000 mercenaries who have been sent to Libya and are openly commanded by Turkish officers. Turkish-built unmanned aerial vehicles have also been despatched to stop the offensive of the Libyan National Army faction, which aims to topple the United Nations-approved government.

The Russians were not happy with this nor the unpredictable outcome it might produce. They asked LNA commander Khalifa Haftar to back off. However, he insisted on declaring himself Libya’s legitimate ruler. But the LNA’s moment of triumph was spoilt by a combination of Turkish-provided firepower and a withdrawal of Russian support.

But then two strange things happened. First, the head of the Turkish navy, rear admiral Cihat Yaycı – who founded and pursued the ‘Blue Motherland’ plan to extend Turkish influence in the Mediterranean, including the agreement with Libya on maritime boundaries – was demoted and then resigned. Yet another pointer to the shambles that is Erdoğan’s government.

The other strange thing was the scathing attack on France by the foreign ministry. All diplomatic niceties were put aside. On May 11, the foreign ministers of Cyprus, Egypt, France, Greece and the United Arab Emirates had issued a joint declaration, denouncing “ongoing Turkish illegal activities in the Cypriot Exclusive Economic Zone and its territorial waters”, which “represent a clear violation of international law”.[1]www.mfa.gr/en/current-affairs/statements-speeches/joint-declaration-adopted-by-the-ministers-of-foreign-affairs-of-cyprus-egypt-france-greece-and-the-united-arab-emirates-11052020.html.↩︎ The declaration also condemned Turkey for driving refugees to the Greek border just before the start of the pandemic, as well as demanding an end to its “military interference” in Libya.

In reply a Turkish foreign office spokesperson criticised “the hypocrisy of a group of countries who are seeking regional chaos and instability.” After attacking Egypt and the UAE in particular, the spokesperson said: “It is apparent that France, whose intentions to establish a state of terror in Syria were disrupted with a heavy blow by our Operation Peace Spring, is attempting to be the patron of this axis of malice.”[2]www.mfa.gov.tr/sc_-33_-gkry-ortak-bildiri-hk-sc.en.mfa These words, while leaving a breathing space if need be, constituted an open attack on a Nato ally, at the same time claiming that Turkish intervention in Syria had been a “heavy blow” against it.

Those costly military adventures now seem to have reached a point where the high-flying bird looks likely to have its wings clipped. All the ingredients of a crisis for the regime’s international relations are in place.

Featured image: People walk on Istiklal street, the main shopping street in Istanbul, a few hours before the weekend lockdown due to the coronavirus, Friday, May 15, 2020. Teenagers were able to leave their homes for the first time in 42 days on Friday, as their turn came for a few hours of respite from Turkey’s coronavirus lockdowns. Turkey has subjected people aged 65 and over and those younger than 20, to a curfew for the past several weeks. (AP Photo/Emrah Gurel)