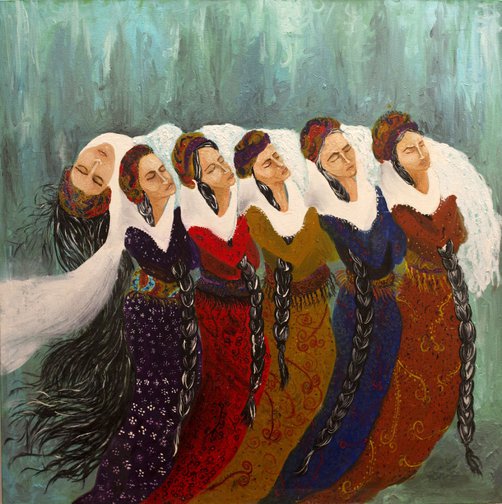 By December 2012, when the peace process between the Turkish state and the Kurdistan Workers’ Party (PKK) to end the decades-long armed conflict was announced, the Women, Peace and Security (WPS) agenda had gained global prominence, with increased visibility for gendered impact of conflict and women’s participation in peacebuilding. Kurdish women peacebuilders and feminist activists mobilised swiftly to ensure peace talks represented their experiences and that their participation was effective.

A gendered perspective, however, never became a priority for the Turkish state. Turkey is yet to adopt a National Action Plan to implement the WPS agenda, despite advocacy by local and international NGOs and the CEDAW Committee pointing to this failure. In fact, following the 2013-2015 peace process, women peacebuilders, activists and civil society organisations (CSOs) working on gender equality have been targeted by the increasingly authoritarian Justice and Development Party (AKP) government. These attacks have implications for both the activists themselves and the populations they serve during the current pandemic, and their empowerment is more crucial than ever.

After the 2013-2015 ceasefire and despite the relatively peaceful environment it created, the peace process broke down in the summer of 2015, and the country ended up in one of the most violent periods since the beginning of the armed conflict in 1984. The rapid escalation of violence in the predominantly Kurdish-populated region was followed by curfews between 2015-2017 during which approximately 1,200 local residents were killed and 350,000 people were displaced. Women and members of the LGBTI+ community faced multi-layered discrimination and violence during that period. In addition to gendered violations by state forces, such as sexist writings made on walls of houses from which local residents were evicted, and scattering of used condoms and women’s underwear inside residents’ houses, reports of domestic violence increased during curfews.

Alongside the escalation of violence, the country experienced a rapid growth of the authoritarian regime, consolidated by the April 2017 constitutional referendum that expanded presidential powers. Using the failed July 2016 attempt as an excuse, the government declared a state of emergency for an initial three months, but it was not until July 2018 that it was finally lifted. The state of emergency rule provided the government with the perfect tools to suppress its dissidents, the majority of them Kurdish activists. The government also started appointing trustees to replace democratically elected mayors in the Kurdish region and imprisoning predominant Kurdish political figures. CSOs in particular suffered greatly from the shrinking of civil space, which intensified as of the mid-2010s. Numerous CSOs, including those operating in the Kurdish region, were shut down by decrees, which also impacted peace-related activities.

The government’s authoritarian policies severely halted the work on the WPS agenda in Turkey in at least two ways, and their continued administration during the pandemic could have dire consequences. First, many of the politicians that were targeted by a wave of arrests, a method used widely by the government to oppress its critics, are peace activist women affiliated with the Kurdish Women’s Movement (KWM). A number of them are also members of the Women’s Peace Initiative (BIKG) and the Women’s Freedom Assembly (KÖM), two initiatives that had great influence over gendering the peace process.

These peace activists had played a pivotal role in establishing the co-chair system, which was first de facto introduced by the later-banned pro-Kurdish Democratic Society Party (DTP) and was legislated in 2014 during the peace process. Aysel Tuğluk, a female Kurdish-Alevi politician arrested in 2016, is the first co-chair of a political party in the history of modern Turkey. The detention and imprisonment of 28 women co-chairs and 12 women deputies since 2015 not only violated their freedom of expression and right to political association and participation but also sharply weakened women’s political participation and restrained the space for discussions around the implementation of UNSCR 1325 in Turkey.

The government’s authoritarian policies severely halted the work on the WPS agenda in Turkey in at least two ways, and their continued administration during the pandemic could have dire consequences.

Continued Oppression against Dissidents during COVID-19

The government’s oppressive trend against dissidents continues even during the pandemic. As part of its COVID-19 emergency response, the AKP government recently amended several execution of penalties laws, providing for reduced prison sentences and early release. Approximately 90,000 prisoners were released following the adoption of the bill on 14 April 2020, somewhat relieving Turkey’s over-capacitated prisons. However, the bill excluded those convicted of charges in Turkey’s much-criticised anti-terrorism framework, a move that meant all political prisoners, many women peacebuilders and activists included, would remain imprisoned during the pandemic. This is not only discriminatory but also creates serious risks for the prisoners’ health, given poor hygiene standards, insufficient meals, and inadequate healthcare in Turkish prisons.

The second deterioration in the WPS agenda concerns government pressures over CSOs working on gender equality in the Kurdish region. Adopting positive peace as a holistic perspective, women peacebuilders in the Kurdish region often undertake projects that address the roots of the conflict, by also taking into consideration the gendered continuum of violence during different phases of the conflict. Indeed, female mayors and co-chairs in predominantly Kurdish-populated cities and districts had opened several women’s organisations and cooperatives specifically working on peacebuilding projects, women’s poverty, and domestic violence since the 2000s.

The bill excluded those convicted of charges in Turkey’s much-criticised anti-terrorism framework, a move that meant all political prisoners, many women peacebuilders and activists included, would remain imprisoned during the pandemic.

The first ‘Women’s Department’ in a municipality in Turkey was established by Gültan Kışanak, a female Kurdish-Alevi politician and the first co-chair of the Diyarbakır Municipality, in collaboration with the KWM. Kışanak was arrested in October 2016 and remains in prison. The Women’s Department was closed by the appointed trustee, while 37 grassroots women’s organisations in different Kurdish-populated cities were shut down by decrees. The crackdown on civil society violates the right to assembly and association while also endangering those organisations’ achievements in local peacebuilding and women’s empowerment. Furthermore, among those closed by the central government were two of the four women’s shelters run by Kurdish municipalities, whose services prove more crucial than ever during the pandemic. Their continued operation could have meant better services and protection for many women and LGBTI+ persons who are increasingly being subjected to domestic violence.

Indeed, the numerous gendered effects of this pandemic have also revealed themselves in Turkey. Reports of domestic violence made to the Federation of Women Associations of Turkey in March 2020 increased 80% compared to statistics from the same month of the previous year. 21 women were killed within 20 days as of 11 March, when the government advised the public to stay home to stop the spread of the virus. 14 of them were killed in their homes, as predicted by women and LGBTI+ rights groups who had raised concerns that the home was not safe for all. The recent surge of hate speech against the LGBTI+ community in Turkey, fuelled by the discriminatory statements of the President of Religious Affairs that LGBTI+ persons, unmarried couples and those living with HIV ‘spread disease’, increases risks for already targeted groups.

Guarantees for women, the LGBTI+ community, children and others who face domestic violence are enshrined in the Istanbul Convention which Turkey is party to, as well as the Domestic Violence Law No. 6284 which provides for a number of protective measures, such as suspending the perpetrator from the family home. However, it has become increasingly difficult for survivors of domestic violence to enforce their rights during the COVID-19 crisis.

State hotlines are inaccessible, survivors are asked to bring doctor’s reports clearing them of COVID-19 before being admitted to shelters (despite risk of exposure by visiting over-crowded hospitals), and are at times denied service due to lack of capacity. In Diyarbakir, whose elected mayor was once again replaced with a state-appointed trustee in 2019, the municipality even shut down its women’s shelters, citing ‘occupancy rates’. Nevertheless, the government is yet to introduce any measures addressing the rise in domestic violence, prompting outcry from women and LGBTI+ rights organisations which are now over-burdened to compensate for state institutions’ failures. In fact, on 22 May, a new wave of arrests targeted at least 18 Kurdish activists and politicians in Diyarbakir, among them women peacebuilders, a member of the Peace Mothers’ Council, and founders and members of the Rosa Women’s Association, which provides essential services to women during the pandemic.

Given lack of political will to address even domestic violence, one of the most visible forms of gender inequality in Turkey, together with the criminalisation of peace-related activities, it is safe to assume that the WPS agenda will never become a priority for the AKP government. The role of CSOs and women and LGBTI+ peacebuilders and activists thus becomes crucial in maintaining a momentum surrounding gender just peace. Considering their already strained capacity responding to failures by the government and the oppressive environment in which they are operating, supporting and empowering civil society is now more important than ever.

This initially requires a holistic understanding of their needs and demands, involving physical, psychological, legal and financial aspects. In-depth research with women and LGBTI+ peacebuilders and activists, especially those working in the Kurdish region, is needed in order to fully grasp current challenges also amidst the pandemic. These studies should guide funders in determining their programming, and women and LGBTI+ peacebuilders and CSO representatives should be included in the design of funding policies.

The role of CSOs and women and LGBTI+ peacebuilders and activists becomes crucial in maintaining a momentum surrounding gender just peace.

Moreover, funders should consider the numerous legal and financial challenges faced by CSOs and democratise their application processes to ensure greater access by grassroots activists and organisations by, for instance, allowing applications from individuals and initiatives which do not possess a legal entity. Building connections and transnational solidarity with women and LGBTI+ peacebuilders and CSO representatives from other conflict-impacted communities, such as Syria, Kosovo and Northern Ireland, could also play a great role in empowering civil society in Turkey. Experience-sharing and technical support, particularly from those individuals and organisations working for peace during conflict and oppression, could help with strategic planning of peace-related activities.

Strengthening women and LGBTI+ peacebuilders may not suffice to encourage the Turkish state to address the WPS framework in the current political climate. However, their empowerment will undoubtedly play a significant role in sustaining a public demand for peace and the gendering of any future peace and democratisation process. The inclusion of institutions and individuals that continue to insist on gender just peace despite numerous extraordinary challenges will be a fundamental component of building that much-needed, bottom-up peace in Turkey.

Feature image: “Dorşîn”, a painting by Zehra Doğan, a Kurdish artist recently released after spending nearly three years in prison in Turkey for painting a military attack on a Kurdish district. | https://zehradogan.net/