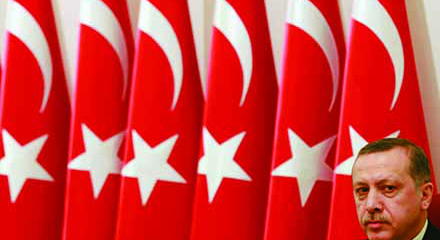 ‘Operation Olive Branch’ has given rise to increased repression and an intense outburst of chauvinism, writes Esen Uslu

The might of Turkish Armed Forces (TAF) has been released on the tiny Syrian province of Afrin. A massive campaign of air strikes has targeted the strongholds of the People’s Protection Units (YPD) and its defensive positions along the hills running parallel to the Turkish border. This was followed by a barrage of long-range artillery and multiple-barrel rocket launchers. Then the special forces moved in, supported by the so-called Free Syrian Army (FSA), to clear pockets of resistance.

After 30 days of assault only 15% of Afrin has been ‘liberated’ and a very limited level of penetration into the province achieved. The initially buoyant Turkish media has now begun talking about a prolonged campaign in order to achieve the aims of the operation.

The problem has been the high level of preparation of YPG forces. An attack has been in the offing for some time. Also the renowned fighting ability and determination of the YPG has not been undermined by such a massive display of force. Despite suffering severe losses, the YPG is still resisting and has maintained its popular support – as indicated by the huge demonstrations in Afrin which has also seen the participation of Kurds from other areas of Syria. Even Kurds supporting Masoud Barzani’s Kurdish Democratic Party in Iraqi Kurdistan have shown their sympathy with YPG forces defending the Afrin enclave.

The FSA – used by Turkey as a fig-leaf to cover its assault on the Syrian Kurds – is working in close partnership with TAF forces. While the FSA likes the international limelight, its forces are not renowned for their military prowess. It was previously given up as a lost cause by the US, which had allocated vast sums to its Train and Equip Program.

But the FSA was brought back to life by Turkey in 2016, thanks to funding from the Gulf States. The idea was to use them in ‘Operation Euphrates Shield’. This was a seven month cross-border campaign conducted by Turkey against Isis and crucially the US-backed Syrian Democratic Forces (which has the YPG at its core). Once again the FSA was unable to prove its worth on the battlefield. It also proved incapable of operating in harmony with TAF forces. So crack army troops were eventually deployed after many delays and setbacks. This inevitably increased the TAF’s casualty figures, while the FSA itself lost much of its credibility.

However, during Operation Olive Branch the TAF has committed its own troops from the very start. The FSA is presented as the local force helping to liberate its homeland from evil Kurdish domination. But despite its limited role there is still strong resentment amongst the FSA rank and file, who believe they are not better treated than ‘mine donkeys’.

As the TAF had failed to achieve any clear success after one month of fighting, the speeches of president Recep Tayyip Erdoğan and statements from his Justice and Development Party (AKP) turned to proclaiming the operation’s ‘achievements’ by boasting about the latest death toll inflicted upon the enemy. According to the most recent reports the FSA and TAF have managed to kill more than 1,675 YPG fighters in exchange for just 32 TAF soldiers, 63 FSA fighters and nine civilians.

Such an imbalance is presented by the media pundits of the AKP government as counting among the greatest feats of any army, especially as they claim that YPG defensive structures rank alongside those built by the German’s in World War II France. Government-controlled media channels are pouring out such propaganda with ever increasing levels of inane rhetoric.

In this context it is worth recalling the dictum of Ho Chi Minh about measuring an army’s success through a body count. He reminded the French: “You can kill 10 of our men for every one we kill of yours. But, even at those odds, you will lose and we will win.” Turkey’s politicians and army top brass do not seem to have learned anything from the years of waging war against the Kurds.

While it has been waging war, the TAF is still suffering spasms from the unsuccessful coup attempt in 2016. Just this week 170 arrest warrants have been issued against serving officers.

US secretary of state Rex Tillerson and national security advisor HR McMaster visited Turkey recently, as the rhetoric from Ankara became poisonous. Among the issues known to have been discussed were the Afrin operation and the perspectives for the YPG-controlled town of Manbij and the area west of the Euphrates river.

The three-hour meeting between Tillerson and Erdoğan was conducted in contravention of the usual etiquette, whereby the Turkish foreign minister acts as the interpreter without any other diplomats being present. What has not emerged from the reports of that tête-à-tête were the other burning demands of Erdoğan and his entourage, especially in relation to the guilty verdicts returned in the US trial of gold trader Reza Zarrab for fraud and sanctions busting in January. During the trial several close associates of Erdoğan were implicated and, once the court has passed sentence, the US government could take further action against Turkey itself, not just Turkish officials. Erdoğan has been trying his utmost to avoid further embarrassment and loss of prestige on the international stage.

Another cause of the deteriorating relations between Ankara and Washington is the fact that ‘moderate’ Islamist oppositionist Fethullah Gülen’s comfortable stay in the US has been extended even though his deportation has been vigorously pursued by the Turkish government. Meanwhile, the US side had been expected to raise Turkey’s increasing cooperation with Russia, from whom it has procured its latest air defence missile system, as well as coming to a chummy agreement on an ‘alternative resolution’ to the Syria problem, under which Turkey will establish 14 observation posts in the Idlib province south of Afrin. The TAF task forces arrived at the predetermined positions in Idlib thanks to the protection provided by Al-Nusra and other militias.

Russian, Iranian and Turkish forces have been operating in close proximity, and recently a Russian ground attack aircraft was shot down by Islamist militia allied to Turkey. The body of the pilot was recovered and returned through Turkey without much fanfare. However, the Russians, who control the airspace over Syria, stopped all Turkish flights for five days. This came as a stark warning to Turkey, which is currently engaged in an operation depending entirely on air superiority.

And in recent days the YPG has asked the Syrian government to send in forces to defend Afrin province. There are rumours that Damascus has accepted the invitation and has started negotiations to ascertain how to proceed – previous discussions on the subject broke down because of the maximalist demands of the Syrian regime. The outcome of the latest round of talks might give a clearer idea of Russian and Iranian aims for the foreseeable future.

While Turkey has been engaged in Afrin, there have been other developments to note. A Nato task force maintained a continued presence in the Black Sea by extending the provisions of the 1936 Montreux Convention Regarding the Regime of the Straits. Two US destroyers, along with one from the Royal Navy, held a joint exercise with Romanian, Bulgarian and Turkish vessels – an apparent show of force against Russia.

Then there is Turkey’s intervention in Cyprus’s ‘exclusive economic zone’ to stop the operation of an Italian underwater exploration ship. Turkey declared an exclusion zone on the grounds that it is conducting a naval exercise in the region, which is due to end next week. Turkey has sent a substantial task force to maintain a presence for the long haul, while the Cypriot and Greek governments have joined forces in protest. Recently Egypt has joined the chorus, condemning the Turkish action as an unjustifiable meddling with Egypt’s sovereign rights in the region.

The recently discovered gas fields south of Cyprus and extending to Israel and Egypt is the main bone of contention. Turkey seems determined to stop Cyprus emerging as the sole owner of the rights, to the exclusion of Turkish Cypriots. There is a real danger of the rhetoric turning into a shooting war.

While a war was being waged in Afrin the leftwing, pro-Kurdish People’s Democratic Party (HDP) held its congress despite both co-chairs being held in jail. One of them was convicted on a trumped-up charge of terrorism, while the other, Selahattin Demirtaş, was remanded in custody but not convicted.

Demirtaş was up for re-election as co-chair, but inner-party manoeuvres resulted in him being excluded from running. That created an outcry among the rank and file and a campaign was launched to re-elect him. However, the leadership managed to get their way and two new co-chairs were elected.

Some have commented that this change of personnel also represents a shift in policy. Those supporting Barzani-like positions – ie, aiming exclusively for Kurdish independence, albeit through negotiations – are said to have gained the upper hand, as opposed to those in favour of the strategy developed by the jailed leader of the Kurdish Workers Party, Abdullah Öcalan, which favours the creation of democracy in the entire region through the participation of other people’s representatives in the movement. For the pro-independence group, Erdoğan, albeit an unpleasant adversary, is seen as a possible partner in negotiations to achieve some of the HDP’s aims. Opponents maintain that Erdoğan must go before anything can be achieved.

More than 700 members of the HDP have been convicted by AKP courts or are otherwise detained – even writing a simple message criticising the government for its Afrin operation or calling for peace is sufficient reason to be questioned, detained or kept in jail for months. This is becoming the new norm.

A German journalist who has been remanded in custody for a year was eventually released, but only after repeated representations to the Bonn government. He said: “I was not indicted, so I do not know why I was detained, and I cannot tell you why I was released.” That sums up the situation in Turkey right now.

The Erdoğan government is using the glorified Ottoman past to whip up public support for the military campaign. The media is subservient. Anti-American, as well as anti-Jewish and pro-Islamist rhetoric is the order of the day. All this has led to the creation of a new term – ‘Ottomania’ – to describe the sick glorification of the imperial past to justify the current war.

For example, the director of religious affairs in this ‘secular republic’, assuming the position of Sheik al-Islam of the Ottoman past, has given a sermon declaring the Afrin war as the “Great Jihad”. Meanwhile, students at vocational schools for the training of imams were asked to don military uniforms for a day in honour of the army, and chant extracts from the ‘Surah’ (‘Victory and conquest’) section of the Quran.

These are examples of the propaganda war currently being conducted in Turkey. The main parties, including the loyal opposition Republican People’s Party (CHP), have come out in support of the Syria incursion (although the CHP has called on the military to stay out of Afrin town because of the risk of a large number of casualties). Calls to convert the war into an assault on the tyranny are still to be heard.