Turkish doctors imprisoned for stating: War is a global threat to public health 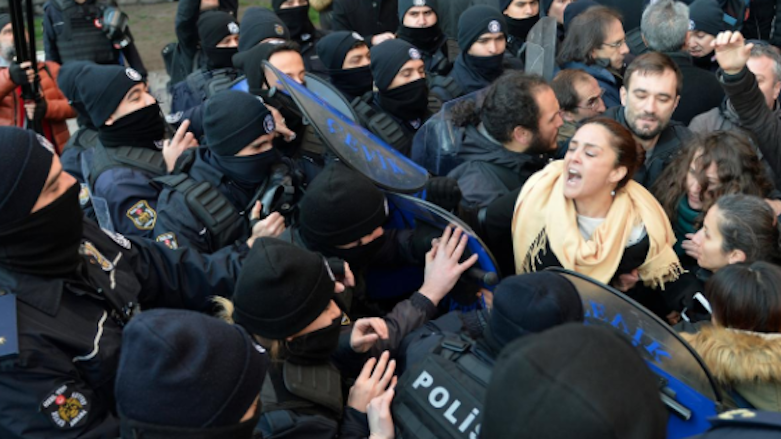 We condemn unequivocally the sentencing to prison of Turkish doctors promoting peace.

A 2000 World Health Organization working paper begins with two simple declarations: “The first principle of health is life. War is a direct threat to life.”[1]World Health Organization Department of Emergency and Humanitarian Action. Conflict and health working paper. preventing violent conflict: the search for political will, strategies, and effective tools. 2000. www.who.int/hac/techguidance/hbp/Conflict.pdf. These assertions may seem statements of the obvious but for millions of people worldwide, surviving war is the main health challenge they face.

More people die and are disabled by war than by diabetes or heart disease. An estimated 191 million people died as a result of conflict during the 20th century, more than half of whom were civilians.[2] Public health challenges faced in war extend beyond efforts to protect civilians’ security. They include preventing illness and death from inadequate or contaminated food or water, poor sanitation, lack of shelter, and disrupted or destroyed healthcare systems and other infrastructure necessary to sustain health.

An equally uncontroversial statement is that the most fundamental duty of doctors and other health professionals is to protect life. As WHO resolution 34.38 proclaims: “The role of physicians and other health workers in the preservation and promotion of peace is the most significant factor for the attainment of health for all.”[3]Levy BS, Sidel VW. War and public health.2nd ed. Oxford University Press, 2008doi:10.1093/acprof:oso/9780195311181.001.0001. Yet on 3 May 2019 the 32nd Criminal Court of Ankara sentenced all 11 Central Council members of the Turkish Medical Association (TMA) to prison for the crime of publicising the public health dangers of war.

The TMA, an internationally respected organisation, represents 80% of Turkey’s doctors. The doctors were arrested in January 2018 after the TMA published a press release entitled “War is a public health problem” in response to a Turkish army incursion into the Kurdish controlled district of Afrin in neighbouring Syria.[4]Dyer, O. Turkish medical leaders are arrested after protesting against Syria incursion. BMJ2018;360:k494. doi:10.1136/bmj.k494 pmid:29386178 This brief statement (see box) highlights the adverse health consequences of all armed conflicts and reinforces the ethical responsibility of doctors to “defend life and commit to maintain the environment of peace.”

War is a public health problem: the complete statement of the Turkish Medical Association

“Each armed conflict, each war brings along human tragedy by causing irremediable problems in terms of physical, mental, social, and environmental health.

“As members of a profession who have taken an oath to save lives we constantly keep in mind our first and foremost duty to defend life and commit to maintain the environment of peace.

“The way to cope with the problem of war is to have a just, democratic, egalitarian, free, and peaceful life and maintain it. No to war: peace now and everywhere!”

The doctors were charged with “provoking people into animosity and hatred” and “propagandising for terrorist organisations.” They were sentenced to 10 months for that press release and another 10 months for a press release in 2016 entitled “It is quite possible to live in peace and equality on this land.” One of the doctors was accused of additional charges resulting in a total sentence of 39 months.

The trial and convictions are the latest in a series of government attacks on the TMA and its members and leaders over recent years. They have occurred in the context of a wider crackdown and use of anti-terrorist legislation to restrict civil society, including to prevent freedom of expression and assembly.[5]Physicians for Human Rights. PHR condemns threats against Turkish Medical Association. January 2018. https://phr.org/news/phr-condemns-threats-against-turkish-medical-association[6]Physicians for Human Rights. Turkish medical group faces lawsuit for providing emergency care. September 22014. https://phr.org/news/turkish-medical-group-faces-lawsuit-for-providing-emergency-care. Hundreds of other doctors, health professionals, and forensic experts, as well as journalists, academics, and lawyers, have been threatened and arrested for discharging their ethical and professional responsibilities.

One of many examples is the sentencing in December 2018 of Şebnem Korur Fincancı, distinguished professor of forensic medicine and president of the Human Rights Foundation of Turkey (HRFT). She was charged with disseminating “terrorist propaganda” after signing a peace declaration with hundreds of other academics in 2016 in response to state violence and curfews in the southeastern Kurdish region. She faces two and a half years in prison. Serdar Küni, also a member of the HRFT, was convicted in 2017 Dyer, O. Turkish doctors protest as 11 of their leaders are imprisoned. BMJ2019;365:l2280. doi:10.1136/bmj.l2280 pmid:31113796 injured members of anti-government Kurdish armed groups.

Health professionals can join their petitions for all charges to be dismissed and appeal to their governments to raise these cases directly with the Turkish authorities and to issue complaints to the UN Office of the High Commissioner for Human Rights.

We must further denounce efforts to prevent health professionals from calling out threats to public health and freely fulfilling our most fundamental duty to provide healthcare to all, regardless of race, ethnicity, religion, national origin, social group, political affiliation, age, disability, or sex.

Featured image: Demonstrators scuffle with riot police during a protest against the detention of the head of the Turkish Medical Association (TTB) and 10 other leaders of the doctors’ union, in Ankara, Turkey, Jan. 30, 2018. (Photo: Reuters)