Posted by Editor on Thursday, February 6, 2020 · Leave a Comment 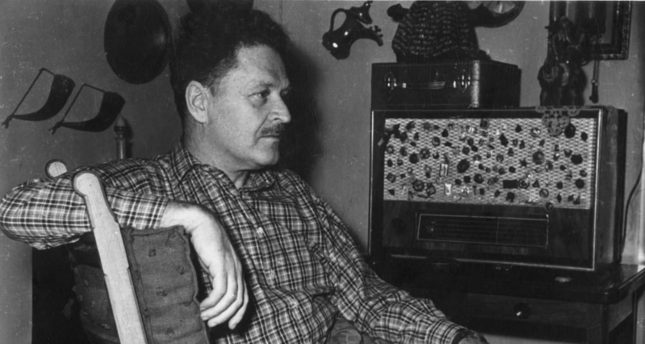 Letters From A Man In Solitary

1
I carved your name on my watchband
with my fingernail.
Where I am, you know,
I don’t have a pearl-handled jackknife
(they won’t give me anything sharp)
or a plane tree with its head in the clouds.
Trees may grow in the yard,
but I’m not allowed
to see the sky overhead…
How many others are in this place?
I don’t know.
I’m alone far from them,
they’re all together far from me.
To talk anyone besides myself
is forbidden.
So I talk to myself.
But I find my conversation so boring,
my dear wife, that I sing songs.
And what do you know,
that awful, always off-key voice of mine
touches me so
that my heart breaks.
And just like the barefoot orphan
lost in the snow
in those old sad stories, my heart
— with moist blue eyes
and a little red runny rose —
wants to snuggle up in your arms.
It doesn’t make me blush
that right now
I’m this weak,
this selfish,
this human simply.
No doubt my state can be explained
physiologically, psychologically, etc.
Or maybe it’s
this barred window,
this earthen jug,
these four walls,
which for months have kept me from hearing
another human voice.

It’s five o’clock, my dear.
Outside,
with its dryness,
eerie whispers,
mud roof,
and lame, skinny horse
standing motionless in infinity
— I mean, it’s enough to drive the man inside crazy with grief —
outside, with all its machinery and all its art,
a plains night comes down red on treeless space.

Again today, night will fall in no time.
A light will circle the lame, skinny horse.
And the treeless space, in this hopeless landscape
stretched out before me like the body of a hard man,
will suddenly be filled with stars.
We’ll reach the inevitable end once more,
which is to say the stage is set
again today for an elaborate nostalgia.
Me,
the man inside,
once more I’ll exhibit my customary talent,
and singing an old-fashioned lament
in the reedy voice of my childhood,
once more, by God, it will crush my unhappy heart
to hear you inside my head,
so far
away, as if I were watching you
in a smoky, broken mirror…

2
It’s spring outside, my dear wife, spring.
Outside on the plain, suddenly the smell
of fresh earth, birds singing, etc.
It’s spring, my dear wife,
the plain outside sparkles…
And inside the bed comes alive with bugs,
the water jug no longer freezes,
and in the morning sun floods the concrete…
The sun–
every day till noon now
it comes and goes
from me, flashing off
and on…
And as the day turns to afternoon, shadows climb the walls,
the glass of the barred window catches fire,
and it’s night outside,
a cloudless spring night…
And inside this is spring’s darkest hour.
In short, the demon called freedom,
with its glittering scales and fiery eyes,
possesses the man inside
especially in spring…
I know this from experience, my dear wife,
from experience…

3
Sunday today.
Today they took me out in the sun for the first time.
And I just stood there, struck for the first time in my life
by how far away the sky is,
how blue
and how wide.
Then I respectfully sat down on the earth.
I leaned back against the wall.
For a moment no trap to fall into,
no struggle, no freedom, no wife.
Only earth, sun, and me…
I am happy.

On The Fifth Day Of A Hunger Strike

My brothers,
Forgive me if I’m unable to say
honestly and straightforwardly
all that I would like to say to you
I’m drunk, my head is light, it spins,
not from raki
but from hunger.

My brothers,
You, at least, have never abandoned me,
Not me or my country or my people.
I know that you love me and love what’s ours
As I love you and love what’s yours.
And for this
I thank you, my brothers,
I thank you.
My brothers,
I have no intention of dying.
And if I am killed
I know
I’ll go on living
in your thoughts.
I’ll live in the lines of Aragon-
in every line that describes
the coming of beautiful days-
And in the pigeons of Picasso,
And in the folksongs of Robson…
And more beautiful than anything else
more triumphant than anything else
I’ll live in the jubilant laughter
of a comrade on strike day
in the port of Marseilles.

My brothers,
Since you really wish me to talk again,
I’m so happy, so happy,
that I spurt the words out!
Nazim Hikmet

Nâzım Hikmet Ran (15 January 1902 – 3 June 1963), commonly known as Nâzım Hikmet (Turkish pronunciation: [naːˈzɯm hicˈmet] ( listen)) was a Turkish poet, playwright, novelist, screenwriter, director and memoirist. He was acclaimed for the “lyrical flow of his statements”. Described as a “romantic communist”and “romantic revolutionary”, he was repeatedly arrested for his political beliefs and spent much of his adult life in prison or in exile. His poetry has been translated into more than fifty languages.
According to Nâzım Hikmet, he was of paternal Turkish and maternal German, Polish, Georgian, Circassian and French descent. Nâzım Hikmet’s mother came from a distinguished, cosmopolitan family with predominantly Circassian (Adyghe) roots, along with high social position and relations to Polish nobility. From his father’s side, he had Turkish heritage. His father, Hikmet Bey, was the son of Çerkes Nâzım Pasha, after whom Nâzım Hikmet was named. His mother, Ayşe Celile Hanım, was of 3/8 Circassian, 2/8 Polish, 1/8 Serbian, 1/8 German, 1/8 French (Huguenot) ancestry. Nazım’s maternal grandfather, Hasan Enver Pasha, was the son of Polish Mustafa Celalettin Pasha and Saffet Hanım who was born to Serbian Omar Pasha and Circassian Adviye Hanım (daughter of Çerkes Hafız Pasha). Mustafa Celalettin Pasha (born Konstanty Borzęcki herbu Półkozic) authored “Les Turcs anciens et modernes” in Constantinople (present-day Istanbul), in 1869. This is considered one of the first works of national Turkist political thought. Nâzım Hikmet’s maternal grandmother, Leyla Hanım, was the daughter of Mehmet Ali Pasha, of French (Huguenot) and German origin, and Circassian Ayşe Sıdıka Hanım who was also a daughter of Çerkes Hafız Pasha.His uncle, Enver Celalettin Pasha, was a member of the Ottoman Army General Staff. Nâzım Hikmet and Celile Hanım’s cousins include Oktay Rifat Horozcu, a leading Turkish poet, and the statesman Ali Fuat Cebesoy, among others.

This page is based on the copyrighted Wikipedia Nazim Hikmet; it is used under the Creative Commons Attribution-ShareAlike 3.0 Unported License. You may redistribute it, verbatim or modified, providing that you comply with the terms of the CC-BY-SA.