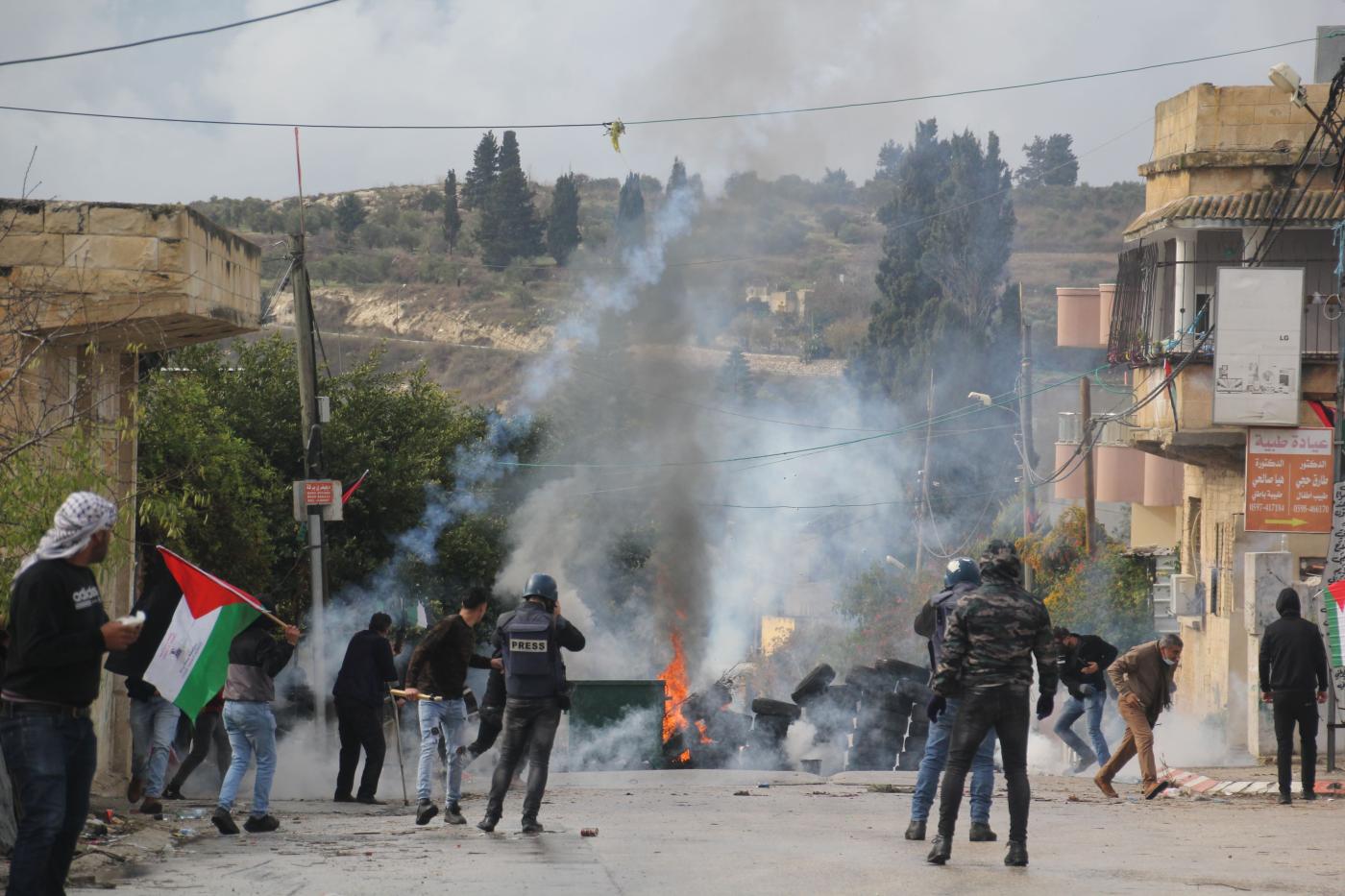 The Palestinian village of Bruqa, north of the occupied West Bank, has been under constant Israeli settler attacks for almost a week.

Close to Road 60, which connects the cities of Ramallah to Nablus and Jenin, Burqa is also near the Israeli Homesh illegal settlement outpost, which lies to its north.

‘Even if it costs us our lives, we will not stand idly against the settlers’ attacks’

Following a shooting near Homesh that left one settler dead and two wounded last week, Burqa’s 4,500 residents have been under continuous attacks and harassment by settlers.

Palestinians in Burqa have faced several raids by Israeli forces, who used stun grenades, tear gas, and both live and rubber-coated bullets against the village’s residents who confronted the settlers’ incursions on their properties and lands.

Tens of Palestinians were wounded last week, including journalists, and several properties and houses vandalised by settlers, according to Palestinian state news agency Wafa.

Some Palestinian grave stones in Burqa’s cemetery were also destroyed.

Bazariya, another Palestinian village located to the west of Road 60, Homesh have also been under ongoing settler attacks.

Israeli forces have blocked roads to Burqa, Bazariya, and Silat ad-Dhahr, a Palestinian town on Road 60, with earth mounds at the entrances.

On Thursday, dozens of Palestinians were wounded, including some suffering breathing problems, after Israeli forces used tear gas to suppress demonstrations in the village of Burqa.

Local sources told Middle East Eye that 15 protesters were wounded by rubber-coated steel bullets shot by the Israeli army, as soldiers chased demonstrators through the village. The soldiers also attacked journalists with tear gas, and threw tear gas canisters at the homes of civilians in the village, according to a MEE correspondent on the scene.

Thousands of settlers, including rabbis and high-ranking political and settler movement figures, marched on the Homesh settlement on Thursday in a show of support for the outpost and in commemoration of the settler killed by a Palestinian last week at the entrance to the settlement.

The deceased was identified as Yehuda Dimentman, who lived in the nearby Shavei Shomron settlement. Dimentman, 25, studied at the yeshiva, or seminary, in Homesh. Two other settlers were wounded in the attack.

Scores of Palestinians were subsequently wounded by settlers who targeted villages around Nablus near the illegal outpost.

The illegal Homesh settler outpost was established without Israeli government permission, and its residents were evacuated in 2005. However, settlers visit the area and operate the Homesh yeshiva, which serves as a de facto outpost.

Some 7,000 settlers – according to organisers’ estimates – arrived in buses, disembarking a kilometre from Homesh, then walked towards it carrying Israeli flags and chanting, while the Israeli army had closed the street to Palestinian residents since the morning. West Bank: One Israeli killed and two injured in shooting near settlement Read More »

The Israeli military also blocked the entrances to the village of Burqa from the western side by constructing large earth mounds using bulldozers, preventing the entry or departure of residents in order to secure the settlers’ route. They also took over the homes of several Palestinian families, using them as military posts to monitor the protesters.

When the settler activists first announced their plan to stage a huge march, Burqa residents gathered and called for confronting the settlers and the Israeli army. Calls for people to mobilise and join the protests were also announced through mosque loudspeakers.

Dirar Abu Omar, a Burqa activist, told MEE that villagers had decided to resist the settlers “with all their might” and prevent them from establishing any new settlement outpost inside Homesh “at any cost”.

“Even if it costs us our lives, we will not stand idly against the settlers’ attacks,” he said.

Abu Omar stated settlers’ attacks against the village and its people had been relentless since the settler was killed a week ago, with the attackers guarded by the Israeli army. The settlers have pelted stones at more than 140 houses, and burned an agricultural facility, he said.