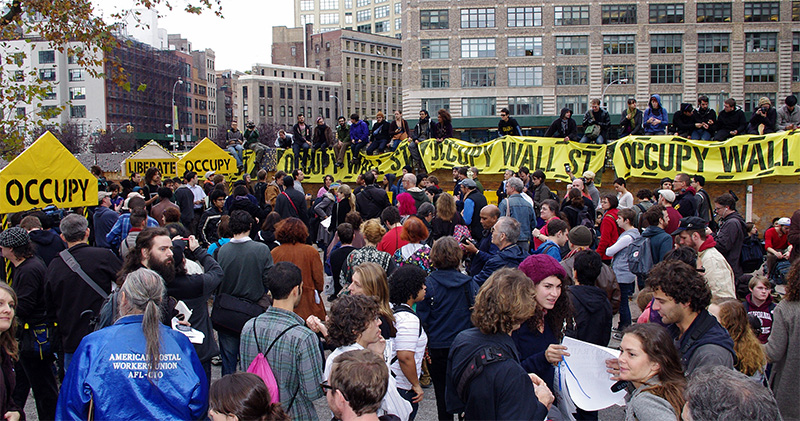 “This is what democracy looks like!”—for some of us protesting Trump in New York on January 21, 2017, this was a familiar chant. We’d heard it before, earlier in the decade, during the Occupy Wall Street movement. That movement had been inspired, in part, by the staggering growth of inequality in the United States and around the world, as a result of the partial dismantling of social insurance policies that, earlier in the twentieth century, had been the chief egalitarian achievement of labor, liberal, and social democratic political parties worldwide.

Occupy Wall Street was inspired as well by the wave of democratic uprisings that had begun in January 2011 in Tunisia, Egypt, Libya, and Syria, among other Arab countries, before spreading to Russia, Spain, and Greece. Samuel Huntington had identified “three waves” of global democratization: the first occurring in the United States and Europe from 1776 to 1945; the second occurring around the world as a result of decolonization after World War II; and the third occurring after the collapse of the Soviet Union in 1989, and sweeping through Eastern Europe, Latin America, and Asia. Since then, other scholars have suggested a “fourth wave,” this one including much of sub-Saharan Africa and the Arab World, and cresting in 2011.

The Occupy movement was prompted, in part, by the impressive speed with which Arab activists had harnessed social media to mobilize large masses of protesters, as if to prove (as one Internet guru boasted) “the power of organizing without organization”—an anarchist’s dream come true. At the same time, Occupy was modeled more closely on the direct-democratic public assemblies of protesters favored that year by the Indignados—the Outraged—a Spanish anti-austerity movement that occupied Puerta del Sol square in Madrid in May 2011.

Hoping to produce a similar upwelling of democratic discontent in America, a group of self-selected activists, about 60 in all, met on the afternoon of August 2, 2011, at Bowling Green, a park in downtown Manhattan with the famous bronze statue of a charging bull, installed in 1989 as a tribute to the financial power of nearby Wall Street.Article continues after advertisement

The people had gathered by the bull in response to a call for a general assembly that would organize an occupation of Wall Street. The idea, which originated with Adbusters, an anti-advertising Canadian print magazine (run, naturally, by veterans of the advertising industry), was popularized on social media by the hacker collective Anonymous, whose followers fetishized the wearing of Guy Fawkes masks as shown in the graphic novel and film V for Vendetta. In the event, only a few dozen seasoned activists showed up, from a variety of political backgrounds. Some were students, others were union organizers. There were socialists, but a surprising number were libertarians committed to “leaderless resistance” and also allied with Ron Paul, who had been a maverick Republican candidate for president in 2008.

But still more were partisans of direct-democratic public assemblies, who in some cases considered themselves anarchists. Expecting an open assembly, the radical democrats and anarchists had found instead a few people with megaphones and prefab placards, trying to rally participants for a conventional march that would make conventional demands. In response, the radical democrats, led by an anthropology professor and avowed anarchist named David Graeber, retreated to a corner of the park to discuss alternative steps.

Sitting in a circle, they debated how they might better organize a Wall Street occupation. They agreed that they would take seriously the online call to create a general assembly—and proposed implementing one of the most radical forms of direct democracy conceivable: a daily meeting, open to all, where virtually all decisions would be made without voting, by consensus, and formally subject to veto by a single “block,” if anyone felt a proposed decision violated an ethical principle. “Occupy Wall Street resurrected a recurring feature of the international left since the 1960s: an overriding commitment to participatory democracy.”

It all seemed hopelessly idealistic. But the direct democrats prevailed. And against all odds, the movement they helped to launch briefly changed the political conversation in America. Occupy Wall Street compelled the media to pay fresh attention to voices on the left. It focused fresh attention on the dramatic rise in economic inequality in the United States and around the world. And despite a deliberate lack of explicit demands, it “reignited hope in the possibility of a free society,” in part by exemplifying, in the words of one participant, a new world that was “participatory and democratic to the core.”

In this way, Occupy Wall Street resurrected a recurring feature of the international left since the 1960s: an overriding commitment to participatory democracy, understood as the making of decisions in a face-to-face community of friends and not through elected representatives.Article continues after advertisement

I myself had once advocated a similar form of democracy, as an activist in Students for a Democratic Society in the late 1960s, inspired by the vision of “participatory democracy” on offer in the organization’s founding manifesto, “The Port Huron Statement.” But my own experiments in radical democracy quickly fell apart, as my friends and I tired of the endless meetings and suppressed disagreements that the quest for consensus entailed. As I wrote in my 1987 book, “Democracy Is in the Streets”: From Port Huron to the Siege of Chicago, perhaps the most important result of the SDS experience was to demonstrate “the incompatibility of rule by consensus with accountable, responsible government in a large organization—or even in a small group of people with divergent interests and a limited patience for endless meetings.”

In fact, the young people who drafted “The Port Huron Statement” in 1962 had never meant to propose rule-by-consensus as a working definition of participatory democracy—this was an understanding that evolved later in the decade and was fiercely contested at the time, notably by pragmatic veterans of the Port Huron conference. Yet even this modest lesson about the limits of rule-by-consensus has proved hard to learn, perhaps because, as I also wrote, “for anyone who joined in the search for a democracy of individual participation—and certainly for anyone who remembers the happiness and holds to the hopes that the quest itself aroused—the sense of what politics can mean will never be quite the same again.”

The result, for many subsequent groups on the global left, has been an unstable political idealism, an amalgam of direct action and direct democracy, with many of the virtues of a utopian and romantic revolt—passion, moral conviction, a shared joy in the joining of battle—but also some of the vices: above all, an obsession with directly democratic processes and an addiction to creating ever more intense situations of felt personal liberation, regardless of the wider political ramifications. Avowedly anti-authoritarian, nonhierarchical, and leaderless, Occupy assemblies cropped up in cities across the United States. Most of them adhered to rule-by-consensus as an end in itself and as the best way to show that direct democracy really is workable. The assemblies were a free association of self-selected participants. In principle, anyone might join and participate, just as anyone might exit at any time.

The assemblies thus enshrined, in a radical form, the principle that “every person is free to do as they wish.”

While the freedom of the individual was in principle inviolable in the assemblies, another goal was to forge, through consensus, a new form of collective freedom. Naturally, the assemblies could not hope to realize this goal without some help. Since leaders were not formally acknowledged, help took the form of so-called facilitators, individuals trained to foster what one guide to the process called “Collective Thinking”:

When faced with a decision, the normal response of two people with differing opinions tends to be confrontational. They each defend their opinions with the aim of convincing their opponent, until their opinion has won or, at most, a compromise has been reached. The aim of Collective Thinking, on the other hand, is to construct. That is to say, two people with differing ideas work together to build something new. The onus is therefore not on my idea or yours; rather it is the notion that two ideas together will produce something new, something that neither of us had envisaged beforehand. This focus requires of us that we actively listen.

If a single person blocks consensus, the group must listen even more carefully and seek to find common ground in a way that might win over the individual with objections; “Prejudice and ideology must be left at home.” Another goal was to forge a “new subjectivity,” expressed in a new form of political speech.

The first surge of enthusiasm gradually waned. As time passed and the Occupiers dug in, the general assembly in New York became bogged down in logistical details. A great deal of time and energy was devoted to making sure the Occupiers had sleeping bags and food and were able to clear garbage from the site. Meetings often lasted for hours. To keep the assembly moving, the facilitators became ever more forceful in setting an agenda and limiting the scope of debate. Sometimes the group resorted to a form of “modified consensus,” which instead of unanimity required a supermajority of at least two-thirds. Even then, anyone had a right to veto a proposal if he or she felt it violated some fundamental principle that might cause him or her to quit the group.

Effective decision making on many matters, both logistical and political, simultaneously devolved to a number of decentralized “working groups” that met separately and fell under the effective control of various individuals who assumed de facto power within the movement. (As one of the leaderless group’s leaders confided, “Consensus only works if working groups or collectives don’t feel they need to seek constant approval from the larger group, if initiative arises from below.”) The groups working on direct action and confrontations with the police naturally put a premium on solidarity and discretion, not an open airing of doubts and disagreements.

This process of political experimentation slowly ground to a halt, as small groups of neo-anarchists, most notably in New York City, inspired by the militancy of Occupy Oakland, kept searching for confrontational “experiences of visionary inspiration”—at the time, it seemed as if the painstaking task of creating a sustainable movement had proved too painful, and boringly pragmatic, for many followers who had been inspired by Occupy Wall Street in its early months. Even worse, the police departments in cities like New York proved adept—thanks in part to the vulnerability of social media to government surveillance—at infiltrating various groups working on direct action, and arresting activists before they could act.

In the early hours of November 15, 2011, the New York Police Department had little trouble clearing Zuccotti Park of its tents and occupants. Although protesters were allowed back into the park without camping equipment, the downtown occupation had lost precious momentum.

Over the winter, activists tried to regroup and to plan another big citywide protest. But a planned May Day blockade of New York City’s bridges and tunnels failed to materialize—and after a brief, last hurrah in September 2012, New York City’s experiment in rule-by consensus was effectively finished—the latest in a long line of failures on the international left to elaborate new forms of horizontal self-governance that can transcend the consensus model and solve some of the manifold problems of democracy in a complex modern society.

Excerpt from Can Democracy Work? A Short History of a Radical Idea, From Ancient Athens to Our World by James Miller. Copyright © 2018 by James Miller. Used by permission of Farrar, Straus and Giroux.