What we mean by the slogan “Woman, Life, Freedom” 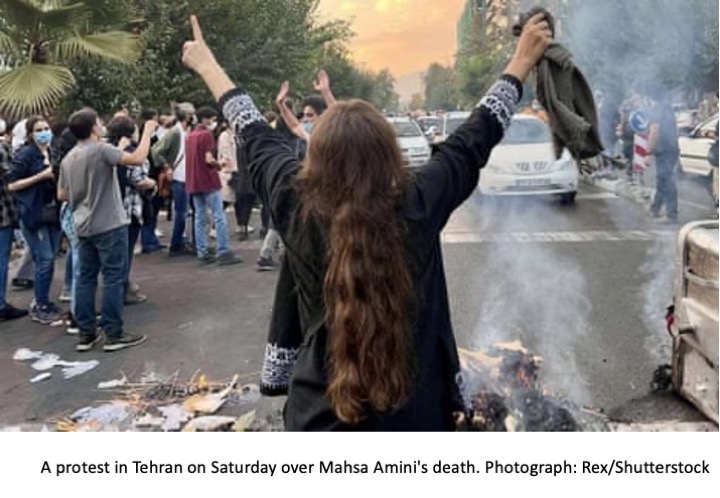 Woman, Life, Freedom (Zan, Zendegi Azadi) has become the main slogan of the uprising which began in September 2022 after the killing in custody of the Kurdish girl Mahsa (Zhina) Amini at the hands of the so-called morality police (gasht ershad) while visiting Tehran from her native town of Saqqez in Kurdistan. The protests began in Kurdistan and rapidly spread across the country and continues unabated to this day. The slogan, Zhen, Zhian, Azadi, which had originally appeared in Syrian Kurdistan (Rojava) rapidly became the calling card of Iranian women supported by men across Iran, and abroad. Here Ardeshir Mehrdad explains why this slogan has such popular appeal and what it means to the people protesting despite the savage crackdown by the security forces of the Islamic regime in Iran.

We shout it out;

We write it on placards and carry it on our shoulders;

We chalk it on our school blackboards;

We write it on the walls of our houses, alleys and streets;

“Women, Life, Freedom” epitomises the “essence” of what we are.

It epitomises what we leave behind and what we seek beyond the horizon ahead.

No to all the inequalities enshrined in law

No to all social inequality

No to all economic inequality

No to commodification of women

No to being a reproductive machine

No to all gender hierarchy

No to all unpaid labour

No to cultural suppression

No to the repression and negation of the body

No to cultural repression

No to ideological repression.

No to marriage of a 13-year-old child

No to all forms of paternalism

No to all structures that create inequality.

A person that is not the private property of men

A person that is not the servant of men

A person that is not a slave of men.

A free soul that radiates on a free body

A free soul that animates love

A free soul that is unleashed iy the poems of “Foruq”.[i]

No to an empty table

No to queues of unemployed

No to the suffering of street vendors

No to the yearnings of the dustman

No to the afflictions of gravediggers

No to the bent backs of porters.

No to endless sweating for a pittance as wage

No to rents that are always in arrears

No to the prescriptions that the pharmacist never sees.

No to that living being that is not a commodity, but is sold in the market

Means: no to the commercialisation of all essentials needs, even those essential for survival

Means: water is not a commodity

Means: land is not a commodity

Means: forests and oceans and rivers are not commodities

Means: a foetus in a womb is not a commodity

Means: all empty hands are not commodities

Means: life is not a commodity.

Life means: the laughter of children

Life means: the calm and clear expressions of the old

A person in love

Means: the songs of nature

No to an system where pens are there for breaking

Art is there for flattering

Hair which floats in the wind, singing

A singer like “Qamar” can sings and not be silenced.

A calendar that does not record the day, months, season, and year with blood and murder

A day when the likes of “Puyandeh” and “Mokhtary” can write, and their pen does not accompany them to the slaughter-house.

A world where lies are not palmed off as news

A world where “journalists” are not in prison for speaking truth

A world where “workers” do not face the sack for demanding their overdue wages.

The right to say no to a “command”

The right to say no to an “order”

The right to say no to a religious “writ”

The right to say no to a “fatwa”

No to a law where “protests” are a crime

No to a law where “demanding justice” is a crime

No to a law where to “struggle for a better life” is a crime.

Liberation of humanity from the yolk of religion

Liberation of humanity from the yolk of gender, nationality, and ethnicity

Liberation of humanity from the yolk of capital and profit.

Achieving a humanity not alienated from itself.

[i] Foruq Farrokhzad the iconoclastic poet who broke the taboos in physical expressing love in Farsi poetry.

[ii] Poet and playwright, imprisoned by the Shah and again by the Islamic regime and executed on his wedding night.