Why Mike Pompeo’s ‘Severest Sanctions’ on Iran Will Backfire 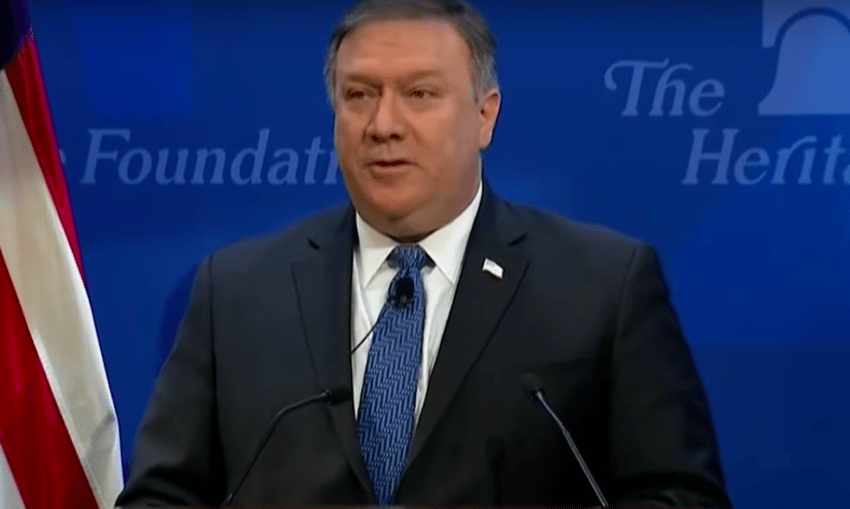 Secretary of State Mike Pompeo’s speech on new sanctions on Iran lays out a wide range of Iranian behavior he would like to change, and specified harsh US financial sanctions as his instrument.

Pompeo, a Kansas oil man backed by the Koch brothers, is just a former congressman and a virulent Christian fundamentalist with white nationalist tendencies. He knows little about the world and is among the worst prepared secretaries of state in American history. He also knows nothing about the history of the region.

Unilateral US sanctions as a means of regime change or radically changing regime behavior have a strong record of failure, especially when applied to states with pricey primary commodities like petroleum.

Among the harshest sanctions ever were applied by the US and the UN to Iraq in the 1990s, and the ruling Iraq Baath Party of Saddam Hussein was able to survive. They cheated on oil sales, smuggled by truck to Turkey and Jordan, and built up billions in their coffers, which cushioned the Baath officials and the military commanders. At the same time, the sanctions destroyed the middle classes and drove people into slummy poverty. Iraq’s literacy rate even slipped. These effects strengthened the regime, which was still oil rich, against the increasingly poverty-stricken Iraqi public, many of whom began turning to religious fundamentalism of the Sadrist variety. The sanctions backfired on the West. It took an actual invasion and long term occupation of Iraq to remove Saddam Hussein and his Baath regime. Ex-Baathists thus forcibly deposed sometimes joined extremist groups such as ISIL.

The classic work on sanctions by K.A. Elliot and G.C. Huffbauer “concluded that empirical research on 115 cases of sanctions imposed from World War I to 1990 indicate that sanctions are more likely to succeed if its goal is modest, the target country is smaller than the sending country, the receiving and sending countries have friendly relations with substantial trade prior to imposition of sanctions, the cost to sending country is not significant, and sanctions are imposed quickly and decisively.” (Quoting S. Shojai and Patricia S. Root, “Effectiveness Of Economic Sanctions: Empirical Research Revisited,” The International Business & Economics Research Journal (Online) Vol. 12, Issue 11. Date: 2013.)

Pompeo’s press on Iran is the opposite of those successful cases in most regards. The US did not have good trade relations with Iran before Pompeo, and Pompeo’s demands are extremely wide-ranging. Historical experience therefore predicts failure.

Moreover, Pompeo’s image of the politics of the Middle East is just warmed over Christian Zionism. He sees tiny Hizbullah of Lebanon as a threat to Israel. In fact, Israel invaded Lebanon in 1982, half destroyed Beirut (which helped inspire Bin Laden to attack New York) and occupied 10% of Lebanon’s territory for 18 years, in the south. Hizbullah grew up as a resistance movement to that occupation, and it has been designated by the Lebanese cabinet as a national guard for the country’s south. Pompeo and his ilk never minded this brutal occupation and never went to bat for Lebanon. If Hizbullah did not exist, likely the Israelis would try to expand north again the very next day. But Hizbullah has not capability to attack Israel conventionally. In Lebanese terms, it is a defensive organization, which is why Lebanon’s Christians now appear largely to support it politically.

Pompeo also completely disregards the key role of Shiite militias backed by Iran in defeating ISIL, an organization that grew up as a direct result of the Republican Party’s invasion and occupation of Iraq.

From a Middle East point of view, the US gave them ISIL, and Iran defeated ISIL. Even some Iraqi Sunnis feel this way. Pompeo’s perspective will have no resonance in the region outside Saudi Arabia and the UAE. Even Kuwait, Oman and Qatar, half of the old Gulf Cooperation Council of Sunni Gulf monarchies, have reacted with dismay or lukewarmness toward the Trump withdrawal from the Iran nuclear deal.

What Pompeo’s policy does suggest for the future is that Iran’s middle class will probably suffer some downward mobility, which will strengthen the regime and the hardliners and prolong the life of the regime.