Will the re-launch of the Mosul battle by the Iraqi PM reverse Trump’s hostile stance? 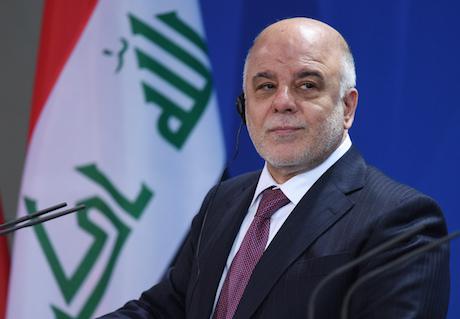 This article first appeared in Open Democracy on March 10, 2017.

The highly unexpected victory of Donald Trump in the US presidential elections sent shock waves across the world, but for Iraq’s PM Haider al-Abadi, it unquestionably heralded the beginning of what promises to be a long-running painful nightmare.

Even while Trump was merely president-elect, Abadi found himself in the unenviable position of having to constantly play down or cover up Trump’s highly outrageous assertions ranging from taking Iraq’s oil to scolding the ousting of Saddam, Iraq’s tyrant.

Abadi’s worst nightmare materialised with Trump ushering in his presidency by stressing, to an audience of CIA officials, on the very first day after his inauguration, not only that the U.S. should have seized Iraqi oil – which according to him was not stealing – but far more chillingly declaring: maybe we will have a second chance. Abadi desperately attempted on Jan 24 to sweep these profoundly alarming statements under the carpet, by pretending he was not clear about what Trump meant. Trump, by contrast was far from apologetic, reasserting to ABC news, the very next day, not just the same comments but brazenly refusing to elaborate what he meant by having a second chance, insisting it was a military matter.

To make matters worse Trump issued an executive order, on Jan 27, banning citizens of seven countries, including Iraq, which is supposed to be the U.S.’s principal ally in the war against ISIL, from entering the U.S., prompting furious protest across Iraq and a resounding call by Iraq’s parliament instructing Abadi to reciprocate the insulting ban. However, as expected, Abadi bluntly refused, citing vital U.S. military support. With Abadi becoming increasingly vulnerable, his office scrambled to alleviate the mounting pressure by ensuring that his readout of the phone call with Trump, on Feb 10, stridently trumpeted the message that, thanks to Abadi’s concerted efforts, Trump is on the verge of removing Iraq from the ban.

Abadi’s over-reliance on amateurish spin to assuage critics and galvanise support backfired when Trump – seemingly antagonized by what he calls fake news – issued his readout, reflecting glaring contradictions with Abadi’s. The main issues highlighted in Abadi’s readout were not even mentioned in Trump’s, and included: Trump’s assurance that he instructed the State Department to find a prompt solution to the travel ban on Iraqi citizens, inviting Abadi to visit Washington; Trump’s ringing endorsement of Abadi’s courageous leadership – while in Trump’s version he merely thanked Abadi for his leadership ; and highlighting Trump’ emphatic support to his government – whereas Trump unambiguously declared support to the Iraqi people.

More significantly, however, were the issues concealed by Abadi, which include: first, Trump’s conspicuously unqualified assertion that the U.S. is building up its military deployment in Iraq, without linking it to the inevitable defeat of ISIL. Second, Trump’s remarks regarding Iran’s threat to the region indicating that Abadi, tacitly agreed, not just with him but to a larger extent with Saudi Arabia’s vociferous yet unsuccessful campaign. This is given the highly credible evidence repeatedly underscored by ex-President Obama, ex-Secretary of State Clinton and ex-Vice President Biden, along with a growing chorus of European leaders pointing the finger of blame firmly at Saudi Arabia for its highly pernicious role in funding, arming and exporting its extremist hardline Wahhabi Salafi ideology to terrorist groups, such as ISIL or ISIS, Jabhat Fateh al-Sham or Jabhet al-Nusra – aims to shift the responsibility for the mounting instability and insecurity to Iran.

Ever since Abadi became PM, in September 2014, the Obama administration made no secret of its relentless effort to shore up his faltering leadership, despite his spectacular failure on the crucial fronts of fighting terror and corruption, supporting reform, and developing the economy. Abadi, in return has irrefutably been working tirelessly to consolidate the U.S. already growing influence. First, in May 2015 at the behest of the U.S. and Saudi Arabia, Abadi adamantly refused to allow the Popular Mobilisation Units PMU – consisting of mainly Shia paramilitary units and volunteers, who spearheaded Iraq’s fight back against ISIL, to wrest back control of many strategic cities when the U.S. stood idly by unwilling to intervene – into Ramadi to thwart ISIL’s offensive, effectively leading to ISIL’s take over of the city, which took seven months to win back. It is doubtless that Iraqi forces have paid a heavy price for Abadi’s ill-conceived determination to bend backwards to comply with the U.S. strategy.

Ever since Abadi became PM, in September 2014, the Obama administration made no secret of its relentless effort to shore up his faltering leadership

Second, in October 2015 Abadi defied the growing calls by his own political bloc – the National Alliance – to invite Russia into Iraq to expand its effective and relentless campaign in Syria against ISIL and JN. Instead, Abadi pledged to Joe Dunford chairman of the U.S. Joint Chiefs of Staff, not to request Russia’s intervention despite the undeniably ineffective U.S. campaign. Russia’s robust intervention in Syria has been a game changer, compelling the U.S. to ramp up its foundering campaign in Iraq.

Third, in preparing the ground for a spectacular achievement to dramatically bolster the Democratic Party candidate Hillary Clinton’s prospects of winning America’s elections, Abadi launched the long-awaited offensive to retake Mosul in March 2016. However, these plans were derailed largely due to the massive protests called for by Al-Sadr to force Abadi to carry out a major overhaul of his corrupt government. The protesters stormed the heavily fortified Green Zone, in April and May, perilously threatening the security of Baghdad’s government and parliament based there. To make matters worse for Abadi these protests were accompanied by a dramatic surge in ISIL’s terrorist attacks, specifically targeting the Shia neighbourhoods where the overwhelming majority of Al-Sadr’s supporters live.

Given that most of the suicide car bombs emanated from Fallujah, the PMU insisted that recapturing Fallujah should take primacy over Mosul. This presented Abadi with a stark choice: either losing face or his premiership. This pushed Obama’s administration to swiftly dispatch, in April 2016, ex-secretary of state John Kerry, followed by Joe Biden, both spelling out the same message that Abadi was a red line and Mosul before Fallujah. Ultimately Abadi had to humiliatingly back down.

Abadi re-launched the assault to recapture Mosul, ensuring that there is adequate time for Clinton to capitalise on it

Fourth, in coordination with the Obama administration, Abadi re-launched the assault to recapture Mosul, ensuring that there is adequate time for Clinton to capitalise on it, explicitly stressing that by the time she becomes president, ISIL would have been driven out of Iraq and squeezed in Syria. So, it is not hard to see why Trump is giving Abadi the cold shoulder treatment. In the eyes of Trump, Abadi is too close to Obama’s administration to be trusted. After all, he is Obama’s poodle in Iraq. All along Trump has made it clear that he admires strong and proud leaders like president Putin of Russia and respects decisive dictators like President Erdogan of Turkey. And indeed Trump has illustrated that he is happy doing business with a weak brutal dictator provided he is rich enough to pay for his protection like Saudi Arabia’s King Salman. In Trump’s book Abadi is certainly far too weak, indecisive and lacks the charisma to be a leader.

Apart from the wholehearted support that Abadi enjoyed under Obama’s administration, which has so far been missing under Trump’s administration, it seems that Abadi has currently been facing challenges similar to those encountered before retaking Fallujah in June 2016. Once more, Al-Sadr’s supporters and thousands of increasingly disenfranchised citizens gathered, On February 11, demanding a complete overhaul of the electoral commission. And as before, force was used to prevent them from storming the Green Zone. Consequently, Al-Sadr vowed to escalate the protests. Simultaneously, ISIL has once again ratcheted up its bombing campaign targeting Shia areas.

With Abadi cornered, he repeated what he did in Fallujah: launching, on February 19, a fresh offensive to claw back control of western Mosul, after the Iraqi forces successfully liberated eastern Mosul on January 23, thereby killing two birds with one stone: halting all protests and compelling Trump to practice what he has consistently preached about combating ISIL. As expected, Trump rapidly dispatched his Defence Chief James Mattis, the next day, to Baghdad not only to demonstrate his administration’s unflinching commitment to battling ISIL, but also to allay already deep-rooted fears regarding U.S. long-term objectives.

Although Abadi’s re-launch of the Mosul battle has successfully stemmed, but it unquestionably has not reversed Trump’s hostile stance. Surely, doing so would require much more than Mattis’s assertion that the U.S. Army is not in Iraq to steal anybody’s oil, apparently meant to dampen the tension and ease the pressure on Abadi during his visit. While Trump’s decision, on March 6, following relentless lobbying by the State and Defence Departments to remove Iraq from the travel ban is a necessary first step, it is beyond doubt insufficient. What is essentially needed is for Trump to personally make it patently clear that he has absolutely no intention to take Iraq’s oil while also transparently explain the motives behind the continuing U.S. military build up.

This article first appeared in Open Democracy on March 10, 2017
Tweet