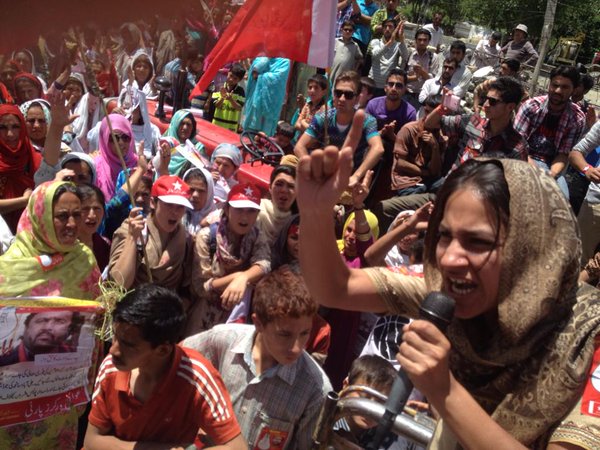 Sara Jaffri (SJ): How did you get involved in political work, and with what sort of organizing have you been involved?

Alia Amirali (AA): I grew up with very politically conscious parents, and we often attended demonstrations and rallies. It was unusual to be brought up in that way in this society. When I got a bit older and started to come into my own, I got involved in organizing in the local anti-war effort in 2001 during the U.S. invasion of Afghanistan.

I went abroad for college between 2002 and 2006, and returned to Pakistan in between during the climax of the Okara peasants’ movement, which has again resurfaced recently. Later on I worked with the Katchi Abadi Alliance and People’s Rights Movement, both collectives involved with people’s struggles for land, livelihood, shelter, and so on. So these were the various avenues through which I moved beyond the activism that I participated in with my parents, and which allowed me to get involved with other movements, cities and struggles.

SJ: You have been organizing with the Awami Workers Party for some time now. In your experience, to what extent can or has the AWP worked with an intersectional understanding of gender and class struggles?

AA: What forms the actual day-to-day agenda of our organizing work is quite separate from intersectional theory that is almost mainstream in certain parts of the world, especially amongst activist and academic circles. Within the party, there isn’t a homogenous understanding that class and gender and ethnicity are all linked. Building that understanding within the party is something we are doing as we go along– and we are also learning how to do it without facing a backlash. Because if you don’t advance an analysis of class and gender strategically, you can actually end up having people against your agenda, which is much worse than not having them support it at all.

Although there are common values held by party members, in terms of the gender question there are variations in the ways people conceive of its position in our larger political project. What has helped to bring feminism on the agenda is the fact that there are now many more women in the party than there were a few years back.

I feel that is the case in any organization and with any kind of oppression- the more people there are within the party who belong to marginalized groups, the stronger the struggle against that very marginalization becomes, both within and outside the party.