World’s worst outbreak of Cholera in Yemen as cases reach 200,000 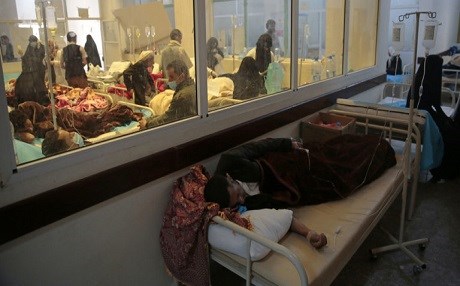 Yemen is now experiencing the worst Cholera outbreak in the world as suspected cases exceed 200,000 with the number increasing at approximately 5,000 cases each day.

In a joint statement released yesterday, Anthony Lake, the Executive Director of the United Nations Children’s Fund (UNICEF) and Margaret Chan, the Director-General of the World Health Organization (WHO) stated that cholera has spread to almost every governorate within just two months in the war-torn country.

There have already been more than 1,300 people reported dead, with one-fourth of them being children, and the death toll is expected to rise.

“UNICEF, WHO and our partners are racing to stop the acceleration of this deadly outbreak,” they said. Both organizations have also called on Yemen’s authorities to strengthen internal efforts to stop the outbreak from spreading further.

“This deadly cholera outbreak is the direct consequence of two years of heavy conflict,” the UN officials said, stating that “collapsing health, water and sanitation systems have cut off 14.5 million people from regular access to clean water and sanitation, increasing the ability of the disease to spread.”

Rising rates of malnutrition in children has weakened their health and immune systems, making them more vulnerable to the disease.

There are an estimated 30,000 health workers across the country that play the largest role in ending the outbreak yet haven’t received their salaries for almost 10 months.

“We urge all authorities inside the country to pay these salaries and, above all, we call on all parties to end this devastating conflict,” the UN representatives said.