After years of battling low-level Sunni insurgency, Iran hit by first IS attack 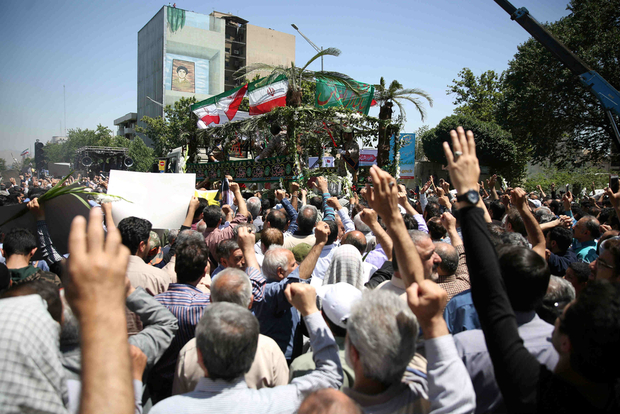 The first attack in Iran claimed by IS follows years of low-level intensity Sunni militant activity.

Already wreaking terror across the region, the Islamic State this week claimed their first attack in Iran – a twin attack on the Iranian parliament and the mausoleum of the founder of the Islamic republic, Ayatollah Ruhallah Khomeini.

The attacks, which killed 17 people and injured dozens more, represent an unprecedented up-tick in the organisation’s regional strategy.

IS has worked since March on building a Farsi brigade regrouping ethnic Iranian Sunnis – Kurds, Arab Ahwazi and Baluchis – with a history of low level insurgency. In its claim of attacks, IS warned the “rafida of Persia” (a pejorative term referring to Shia Muslims) it will “relentlessly bleed them to death, destabilize their security situation and destroy their institutions”. Iran is engaged directly, and through proxies, in the war against IS in Iraq, and in Syria, Iran has buttressed the government of Syrian President Bashar al-Assad against a largely Sunni-led rebellion.

In its statement, IS said that five of its “infiltrators” had conducted the attack, information confirmed by Iran’s Intelligence Ministry, which added that the men had fought with the militant group in Mosul in Iraq, and Raqqa in Syria. IS is currently fighting for its life in both cities, previously the group’s major hubs.

“The recording reflected IS’ clear intention to build a structure within Iran,” said Hassan Abu Haniyah, a Jordanian expert in radical Islamic groups.  The video featured several native Iranian men, including one Baluchi, one Kurd and one Arab Ahwazi, a Sunni minority in southern Khuzestan province, he explained. According to Abu Haniya, there are around 1,000 Sunni Iranians fighting with IS in Iraq and Syria. And with the group facing significant losses within its “caliphate,” some could be trickling back home.

Iranian IS fighters returning from Caliphate?

According to an article in Al-Monitor, the Islamic State Tehran attackers were originally part of another cell in Iran, many members of which were apprehended by authorities last year. It was believed to be headed by an individual known as Abu Ayesha, killed by Iranian authorities.Last June, Iran’s intelligence ministry also declared it had thwarted a plot by another IS-inspired cell to carry out bomb attacks in the capital Tehran and other parts of the country.As with its policy in Iraq and Syria, IS in Iran appears to aspire to incite religious strife between Shia and Sunnis, the latter group representing about 9 percent of the population of 80 of Iran.In order to achieve that, IS hopes to trigger a backlash by building on the grievances of Sunni minorities located in the Kurdish, Khuzestan and Baluch areas as geographically and socio-economically marginalized populations, perceived as oppressed by a Persian-speaking Shia majority.

According to the BBC,  one of the Tehran attackers was an Iranian Kurd, Syrias Sadeghi, who was known as an IS propagandist. According to a Kurdish writer, four of the five attackers were Iranian Kurds, information that MEE could not independently confirm.“The Sunni insurgency problem in Iran has always been a low intensity conflict, with groups such as the Kurdistan Free Life Party (PJAK), as well as the Islamic Jundallah faction opposing the government in Tehran,” Iran expert Thierry Coville said.Sunni minorities in Kurdish, Khuzestan and Baluch areas are considered outliers in Iran.In 2014, Rudaw reported that IS recruitment efforts in Iran had focused on the Iranian Kurdistan region, with activists saying at the time that over 100 young Kurds had joined the group.The Kurds who joined IS were from the cities of Kermanshah, Jiwanro and Bawajan, according to Rudaw. And the BBC reported that Sadeghi is a native of Kermanshah.And in 2016, a top Iranian military official claimed that IS was recruiting members from the western majority Kurdish region of the country.“The terrorist organization IS attracted members to its ranks from the Iranian towns of Qasr e-Shirin Naft Shahr bordering Iraq,” Iranian Army ground force chief Brigadier General Ahmad Reza Pourdastan said at the time, as quoted by Now Lebanon.

Iran has also been struggling against an ethnic Baluch Islamic insurgency in its southeastern province of Sistan and Baluchistan.

“Among Baluch grievances are aspirations of independence, their geographic isolation and a general feeling that Baluchis do not belong to the rest of country,” Vatanka explained. Since 2003, the Sunni militant group Jundallah has targeted members of the Iranian security forces in Iran’s southeastern province of Sistan-Baluchestan. By 2010 Jundallah had been responsible for the killing of at least 154 security personnel and civilians. However, the arrest and killing of scores of the group’s fighters in 2011 dealt the group a blow, with new formations emerging – such as Harakat Ansar Iran (HAI) and Jaish al-Adl Iran (JAA) coming to the fore.

According to a report by the Combating Terrorism Center think tank, both groups claimed responsibility “for a multitude of attacks across Sistan-Baluchistan against members of the Iranian security services, particularly the Islamic Revolutionary Guard Corps” and “symbols of the Iranian state, political and clerical leaders, and soft civilian targets such as Shia mosques” between 2003 and around 2010.

The scene of a bomb attack in the southwestern Iranian city of Ahvaz in 2006, in which six were killed, dominated by ethnic minority Arabs (AFP)

In addition, HAI claimed responsibility for a suicide bombing in the port city of Chabahar in Sistan-Baluchistan on 19 October 2012. And last April, 10 Iranian border guards were killed by JAA. Yet for Coville, the increasing level of education in the Sistan-Baluchistan areas has resulted in local residents becoming less attracted to violent militant activity. “Generally the radical Islamist message does not resonate is mostly secular Sunni areas such as Baluchistan,” Vatanka said. Ahwazi Arabs, which include a Sunni minority (the majority being Arab Shia) have also been considered as another oppressed group in Iran. Since 2005, Tehran made indiscriminate mass arrests of hundreds of Ahwazi human rights and political activists.

Iran’s ethnic Baluch, Ahwazi and Kurdish population have endured widespread poverty and underdevelopment, and the areas are among Iran’s poorest and least developed regions, and Iranian Sunnis’ faith has also often been seen as a source of contention with the Islamic Republic’s Shia identity.  In 2010, a UN panel said that minorities in Iran face discrimination, due to their ethnicity, and that Arabs, Kurds and others do not enjoy the same access to free expression, health or housing, seemingly putting these groups at odds with Tehran. It is now an IS signature to move to build on such sectarian rivalries and rifts plaguing the region’s multi-ethnic and religiously diverse societies.

This week’s Tehran attacks show once more that the militant organisation is reverting to its usual divisive playbook to gain a foothold in another country, this time Iran.