Yemen: The Deeper Meaning in a Lost War

Posted by Editor on Thursday, September 5, 2019 · Leave a Comment 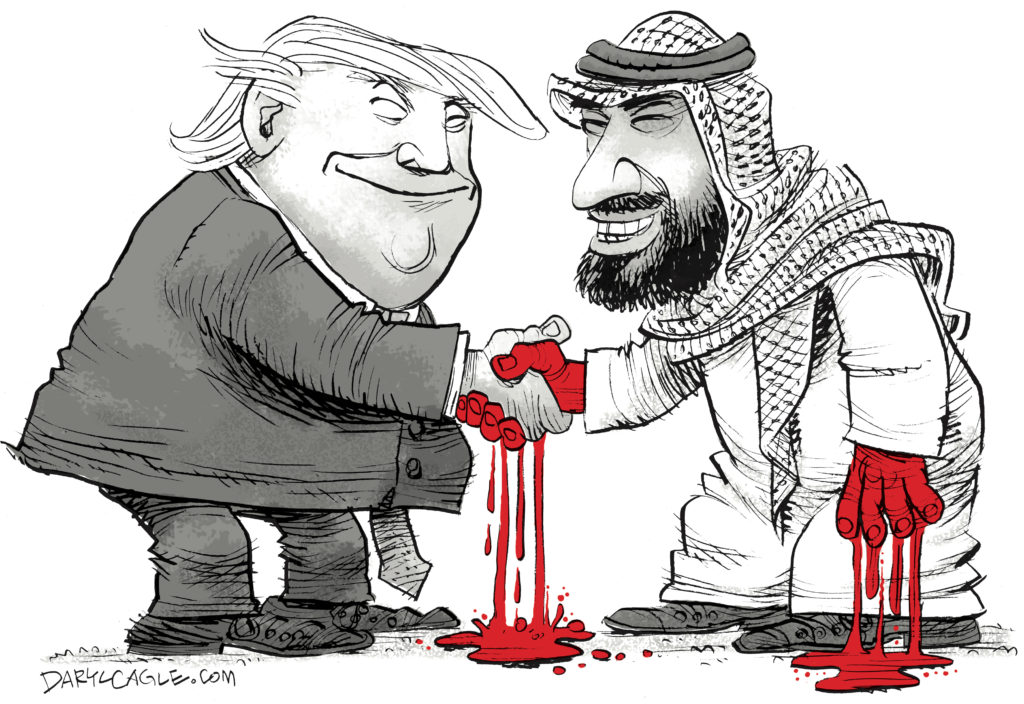 It’s pretty clear. Saudi Arabia has lost, and, notes Bruce Riedel, “the Houthis and Iran are the strategic winners”. Saudi proxies in Aden – the seat of Riyadh’s Yemeni proto-‘government’ – have been turfed out by secular, former Marxist, southern secessionists. What can Saudi Arabia do? It cannot go forward. Even tougher would be retreat. Saudi will have to contend with an Houthi war being waged inside the kingdom’s south; and a second – quite different – war in Yemen’s south. MbS is stuck. The Houthi military leadership are on a roll, and disinterested – for now – in a political settlement. They wish to accumulate more ‘cards’. The UAE, which armed and trained the southern secessionists has opted out. MbS is alone, ‘carrying the can’. It will be messy.

So, what is the meaning in this? It is that MbS cannot ‘deliver’ what Trump and Kushner needed, and demanded from him: He cannot any more deliver the Gulf ‘world’ for their grand projects – let alone garner together the collective Sunni ‘world’ to enlist in a confrontation with Iran, or for hustling the Palestinians into abject subordination, posing as ‘solution’.

What happened? It seems that MbZ must have bought into the Mossad ‘line’ that Iran was a ‘doddle’. Under pressure of global sanctions, Iran would quickly crumble, and would beg for negotiations with Trump. And that the resultant, punishing treaty would see the dismantling of all of Iran’s troublesome allies around the region. The Gulf thus would be free to continue shaping a Middle East free from democracy, reformers and (those detested) Islamists.

What made the UAE – eulogised in the US as tough ‘little Sparta’ – back off? It was not just that the Emirs saw that the Yemen war was unwinnable. That was so; but more significantly, it dawned on them that Iran was going to be no ‘doddle’. But rather, the US attempt to strangulate the Iranian economy risked escalating beyond sanctions war, into military confrontation. And in that eventuality, the UAE would be devastated. Iran warned explicitly that a drone or two landed into the ‘glass houses’ of their financial districts, or onto oil and gas facilities, would set them back twenty years. They believed it.

But there was another factor in the mix. “As the world teeters on the edge of another financial crisis”, Esfandyar Batmanghelidj has noted, “few places are being gripped by anxiety like Dubai. Every week a new headline portends the coming crisis in the city of skyscrapers. Dubai villa prices are at their lowest level in a decade, down 24 percent in just one year. A slump in tourism has seen Dubai hotels hit their lowest occupancy rate since the 2008 financial crisis – even as the country gears up to host Expo 2020 next year. As Bloomberg’s Zainab Fattah reported in November of last year, Dubai has begun to “lose its shine,” its role as a center for global commerce “undermined by a global tariff war—and in particular by the US drive to shut down commerce with nearby Iran””.

An extraneous Houthi drone landing in Dubai’s financial zone would be the ‘final nail in the coffin’ (the expatriates would be out in a flash) – a prospect far more serious than the crisis of 2009, when Dubai’s real estate market collapsed, threatening insolvency for several banks and major development companies, some of them state-linked – and necessitating a $20 billion bailout.

In short, the Gulf realised MbS’ confrontation project with Iran was far too risky, especially with the global financial mood darkening so rapidly. Emirati leaders faced off with MbZ, the confrontation ideologue – and the UAE came out of Yemen formally (though leaving in situ its proxies), and initiated outreach to Iran, to take it out of that war, too.

It is now no longer conceivable that MbS can deliver what Trump and Netanyahu desired. Does this then mean that the US confrontation with Iran, and Jared Kushner’s Deal of the Century, are over? No. Trump has two key US constituencies: AIPAC and the Christian Evangelical ‘Zionists’ to ‘stroke’ electorally in the lead up to the 2020 elections. More ‘gifts’ to Netanyahu in the lead into the latter’s own election campaign are very likely also, as a part of that massaging of domestic constituencies (and donors).

In terms of the US confrontation with Iran, it seems that Trump is turning-down the volume on belligerence toward Iran, hoping that economic sanctions will work their ‘magic’ of bringing the Islamic Republic to its knees. There is no sign of that however – and no sign of any realistic US plan ‘B’. (The Lindsay Graham initiative is not one).

Where does that leave MbS in terms of US and Israeli interests? Well, to be brutal, and despite the family friendships … ’expendable’, perhaps? The scent of an eventual US disengagement from the region is again hanging in the air.

The deeper meaning in the ‘lost Yemen war’, ultimately, is an end to Gulf hopes that ‘magician’ Trump would undo the earlier Gulf panic that the West would normalise with Iran (through the JCPOA), thus leaving Iran as the paramount regional power. The advent of Trump, with all his affinity towards Saudi Arabia, seemed to Gulf States to promise the opportunity again to ‘lock in’ the US security umbrella over Gulf monarchies, protecting these states from significant change, as well as leaving Iran ‘shackled’, and unable to assume regional primacy.

A secondary meaning to Yemen is that Trump and Netanyahu’s heavy investment in MbS and MbZ has proved to be chimeric. These two, it turned out were ‘naked’ all along. And now the world knows it. They can’t deliver. They have been bested by a ragtag army of tough Houthi tribesmen.

The region now observes that ‘war’ isn’t happening (although only by the merest hair’s breadth): Trump is not – of his own volition – going to bomb Iran back to the 1980s. And Gulf States now see that if he did, it is they – the Gulf States – who would pay the highest price. Paradoxically, it has fallen to the UAE, the prime agitator in Washington against Iran, to lead the outreach toward Iran. It represents a salutary lesson in realpolitik for certain Gulf States (and Israel). And now that it has been learned, it is hard to see it being reversed quite so easily.

The strategic shift toward a different security architecture is already underway, with Russia and China proposing an international conference on security in the Persian Gulf: Russia and Iran already have agreed joint naval exercises in in the Indian Ocean and Hormuz, and China is mulling sending its warships there too, to protect its tankers and commercial shipping. Plainly, there will be some competition here, but Iran has the upper hand still in Hormuz. It is a powerful deterrent (though one best threatened, but not used).

Of course, nothing is assured in these changing times. The US President is fickle, and prone to flip-flop. And there are yet powerful interests in the US who do want see Iran comprehensively bombed. But others in DC – more significantly, on the (nationalist) Right – are much more outspoken in challenging the Iran ‘hawks’. Maybe the latter have missed their moment? The fact is, Trump drew back (but not for the stated reasons) from military action. America is now entering election season – and it is fixated on its navel. Foreign policy is already a forgotten, non-issue in the fraught partisan atmospherics of today’s America.

Trump likely will still ‘throw Israel a few bones’, but will that change anything? Probably, not much. That is cold comfort – but it might have been a lot worse for the Palestinians. And Greater Israel? A distant, Promethean hope.

Alastair Crooke is a former British diplomat, founder and director of the Beirut-based Conflicts Forum.