Yemen war: At least six times as many killed in conflict than previously thought 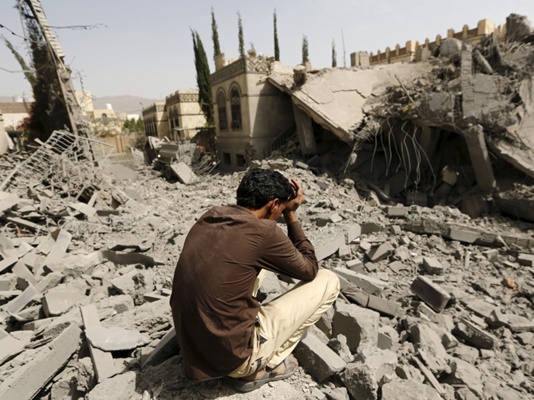 The number of people killed by the violence in Yemen has for the first time risen above 3,000 dead in a single month, bringing the total number of fatalities to over 60,000 since the start of 2016. The figure is six times greater than the out-of-date figure of 10,000 dead often cited in the media and by politicians.

“We have recorded 3,068 people killed in November, bringing the total number of Yemenis who have died in the violence to 60,223 since January 2016,” says Andrea Carboni, a researcher on Yemen for the Armed Conflict Location and Event Data Project (ACLED), formerly based at Sussex University, that studies conflicts and seeks to establish the real casualty level.

The figures do not include the Yemenis who have died through starvation or malnutrition – the country is on the brink of famine, according to the UN – or from illnesses caused by the war such as cholera.

This number of Yemenis dying in the war has been played down by the Saudi and UAE-led coalition, which has active military support from the US, UK and France, and has an interest in minimising the human cost of the conflict. The coalition has been trying since March 2015 to reinstate in power Abdrabbuh Mansour Hadi, whose government had been overthrown by the rebel Houthi movement in late 2014.

Mr Carboni says that ACLED’s latest figures, which were released on Tuesday, are drawn primarily from information in hundreds of online papers and news sites in Yemen. The possible political bias of these sources is taken into account and different reports are cross-referenced using the most conservative numbers, to arrive at the final number.

ACLED executive director Clionadh Raleigh says: “ACLED’s estimation of Yemen’s direct conflict deaths is far higher than official estimates – and [these are] still underestimated. Fatality numbers are only one approximation of the abject tragedy and terror forced upon Yemenis.”

The 60,223 figure for those killed in the fighting is lower than the total fatalities in Yemen since Crown Prince Mohammed bin Salman began the Saudi intervention in March 2015 because ACLED only began its count at the beginning of 2016.

But the organisation is now also conducting a count of those killed in 2015, whom Mr Carboni says he estimated “to number between 15,000 and 20,000”. This would mean that the overall figure for fatalities as a result of violence over almost four years of war would rise to between 75,000 and 80,000.

The steep increase in the number killed this year is explained by the Saudi and UAE-led assault on the port of Hodeidah on the Red Sea coast which is the main conduit for relief supplies reaching the Yemeni population.

This has led to a 68 per cent increase in the number killed in the first 11 months of this year, to 28,115, according to ACLED.

The number of those who have already died in Yemen may soon be far surpassed by the number likely to die because of hunger and disease. Some 20 million people are not getting enough to eat – 70 per cent of the population – and for the first time, 250,000 are facing “catastrophe”, according to the UN humanitarian chief Mark Lowcock, who has recently returned from Yemen.

He said that there has been “a significant, dramatic deterioration” of the humanitarian situation with those Yemenis facing starvation and death being concentrated in the four provinces where the fighting is at its most intense: Hodeidah, Saada, Taiz and Hajja.

A significant change in the conflict in Yemen is that the Saudi role in the war is coming under far greater scrutiny since the murder of dissident Saudi journalist Jamal Khashoggi by a Saudi team in Istanbul on 2 October. International revulsion over his killing has led to greater focus and criticism of the Saudi-led war in Yemen and the humanitarian calamity it has produced.

At the UN-sponsored talks between the Houthis and the Saudi-backed government being held in Sweden, delegates are discussing the expansion of a shaky truce in Hodeidah. Under this proposal, all troops would withdraw from the city and later from the province, leaving the UN with oversight over an interim administration. The UN envoy to Yemen, Martin Griffiths, said he wanted “to take Hodeidah out of the war” so aid could be delivered.

Another sign of a limited de-escalation of the war came on Tuesday with the Saudi-backed government and the Houthis exchanging lists of some 15,000 prisoners to open the door for a swap agreement. But the talks, set to last until 13 December, have yet to make progress on important differences over a ceasefire at Hodeidah, reopening the Houthi-held airport at the capital Sanaa, and the shoring up of the central bank.

The prisoner swap would take place on 20 January via Sanaa airport in north Yemen and government-held Sayun airport in the south – a process overseen by the UN and the International Committee of the Red Cross.

“We have exchanged more than 7,000 names from each side, including some 200 high-ranking officers,” said Ghaleb Mutlaq, a delegate for the Houthis.

The Trump administration is paying an increasingly high political price at home and abroad for its continued support for the Saudi crown prince and the war in Yemen, which are coming under strong criticism from both Republicans and Democrats in Washington.

Nevertheless, the administration says it will continue to back the Saudi-led coalition, claiming that this is necessary to combat Iranian influence and Islamic fundamentalists.

“We do believe that support for the coalition is necessary. It sends a wrong message if we discontinue our support,” said Timothy Lenderking, US deputy assistant secretary for Arabian Gulf Affairs at the weekend.

Even so, time appears to be running out for the Saudis and it is becoming clear that their long war may have destroyed Yemen but has failed in it purpose of defeating the Houthis.

Posted on the Independent