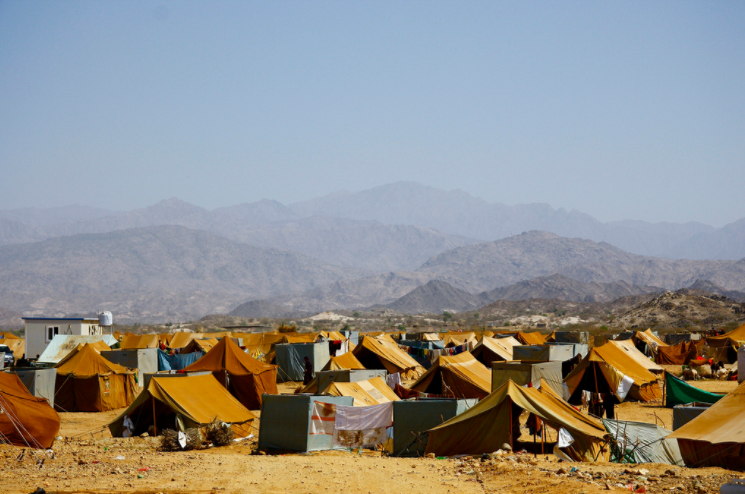 Yemen had the longest and deepest Arab Spring — why did the country collapse into civil war?

First published by Jacobin, May 12. The first thing any socialist, of whatever hue, needs to understand about the war in Yemen is that none of the leaders of any of the many factions involved has objectives worthy of support. Former president Ali Abdullah Saleh — the kleptocrat who ruled the country autocratically for thirty-three years — has allied with the Houthis, a familial, fundamental Zaydist movement that believes that only the prophet’s descendants have the right to rule.They are fighting Saleh’s former vice president, Abdrabbuh Mansur Hadi, the southerner elected to implement the transition to a “new Yemen” following the Gulf Cooperation Council (GCC) agreement of November 2011, which outlined a democratic transition process. The GCC states (Bahrain, Kuwait, Oman, Qatar, Saudi Arabia, the United Arab Emirates) as well as the international community endorsed and supported this agreement. The transitional regime collapsed in 2014, leading to civil war and the Saudi-led coalition intervention in March 2015.What led Yemen down this path to chaos? After all, the country includes the former People’s Democratic Republic of Yemen, the only socialist state in the Arab world. In the 1970s, the other Yemeni state, the Yemen Arab Republic, had a strong rural movement based on community and tribal solidarity, which organized, financed, and managed development initiatives. The Republic of Yemen, born in 1990, was the only democracy in the Arabian Peninsula. However flawed, it held real multiparty elections.

In 2011, Yemen had the longest and deepest Arab Spring revolutionary movement, which extended to the remotest locations. Why did the transition fail? How did the country collapse into civil war? What brought about external military intervention?

By 2010, the Saleh regime was facing considerable pressure: lower oil production had cut into its patronage system; its policy for managing the population — the classic divide-and-rule strategy — was coming undone; the ruling clique was collapsing as Saleh fought to install his son as his successor while other contenders believed their turn had come.

The separatist movement in the south was developing and gaining popular support despite armed repression. Similarly the wars against the Houthis in the far north were clearly unwinnable, although there had been six bouts of fighting since 2004, each worse and more violent than the last.

The population was experiencing worsening poverty: hundreds of thousands of young people, educated and not, faced unemployment. Rapid population growth put pressure on already limited medical and educational institutions as well as natural resources. The water crisis affected agricultural production, and its unregulated management deprived smallholders of water from their shallow wells, while the wealthier larger landholders dug deeper and deeper boreholes.

In this context, it is worth remembering that 70 percent of Yemen’s population lives in rural areas and depends on cultivation and livestock. The first decade of the twenty-first century, however, saw a shift from agriculture to casual urban labor as the primary source of rural households’ incomes. In towns and cities, men congregated in search of casual unskilled employment, where living conditions were also affected by water scarcity.

Economic development policies in line with the Washington Consensus contributed to this situation, abetting the regime’s strategies to enrich the few while impoverishing the many. The government’s decision to cut fuel subsidies in 2014 illustrates this: the IMF and World Bank promoted lifting these subsidies supposedly to save water; in practice this increased the cost of living for the population as a whole and increased smugglers’ operations.

The surprise in 2011, then, was not that the people rose up, but that they waited so long to do so. Protests and occupations spread across the country and lasted for months on end. Indeed, in Sana’a, Yemen’s largest city, the uprising continued well into 2013.

Ordinary citizens, especially young people and women, demanded the downfall of the Saleh regime and an end to his regime’s corruption and nepotism. They also wanted jobs, a national economy that would benefit the population as a whole, and true democracy. Participants were often young — not surprising in a country where 80 percent of the population is under thirty-five.

Tunisia had the only successful revolution in 2011 because its armed forces were too weak to intervene. Egypt’s temporary success came when the military decided to abandon Mubarak, probably because they did not want his non-military son to take over. In Yemen, the movement persisted for as long as it did because the military split.

After the Friday of Dignity massacre on March 18, 2011 the military unit led by Saleh’s rival Ali Mohsen al Ahmar allied with the Islah opposition party to join the revolution. Thereafter, they claimed to protect the demonstrators against the regime’s forces. This produced a series of armed conflicts between the two sides over the following months, while the street protesters remained peaceful.

Seeing Saleh’s failure to control the situation, the GCC states, the United States, and other northern countries decided that the dictator would have to go. But their initiatives were halfhearted. When the GCC agreement was finally signed that November, it allowed Saleh to stay in Yemen and retain his position at the head of the General People’s Congress, the political entity whose sole purpose is to keep him in power.

The transitional regime, supposed to bring about democracy within two years, suffered from a range of fundamental flaws: a paralyzed, national-unity government, a security sector reform that failed to enact any reforms, a poorly managed National Dialogue Conference that couldn’t meet its goals, and a constitutional committee whose draft triggered a civil war.

By 2014, the Houthi movement which had fought Saleh’s regime for six years had become its ally. United by their opposition to the new constitution — which called for transforming Yemen into a federal state with six regions — the erstwhile enemies also violently objected to the part-Islamist Islah Party’s newfound power. As their military approached Aden — and Hadi — the transitional president fled to Saudi Arabia and asked the GCC to intervene and restore him to power.

Thus, a Saudi-led coalition began aerial attacks on March 26, 2015. Within two years, it has launched over ninety thousand air strikes. The coalition includes all the GCC states with the exception of Oman. Saudi Arabia and the United Arab Emirates, with Qatar’s lesser participation, lead. The GCC has also recruited neighboring states whose interest lies in ensuring continued financial support for their regimes.

The UAE forces receive direct support on the ground from various international contract militias, and the United States and the United Kingdom are supposedly ensuring that the air forces select their targets in compliance with international humanitarian law. Evidence clearly challenges the effectiveness of this arrangement, given the destruction of hundreds of medical facilities — including four operated by the highly respected Doctors Without Borders — schools, markets, mosques, weddings, and funerals.

Coalition forces “liberated” Aden in August 2015 and most of the country’s south later, but elsewhere they faced a stalemate. In early 2017, government forces took Mokha and at the time of writing, threaten to attack Hodeida, the country’s main port.

While some government ministers work in Aden, others, including Vice President Ali Mohsen, are based in Mareb. President Hadi spent only 167 days in Yemen out of the 607 days between the liberation of Aden and end March 2017. Indeed, he has no significant control over the liberated areas where administrations only function through local agreements, if they function at all.

Salafi forces largely manage security in the southern governorates; the United Arab Emirates trained, equipped, and paid for these militias. They claim to be tracking down Al Qaeda cells but mostly arrest people associated with Islah, which the UAE sees as Yemen’s branch of the Muslim Brotherhood and therefore tops its list of enemies.

Thanks to this war, people are already dying of starvation. With only 3 percent arable land, Yemen suffers from extreme water scarcity. Only two-thirds of the country’s water use is replenished by annual rainfall, which means that some fossil aquifers will soon be depleted.

Increasing agricultural production in the future will depend on fundamental improvements, including research into rain-fed crops and measures to address the changing rainfall patterns. Even with these developments, Yemen cannot become self-sufficient in basic cereals. If the water crisis is ignored, most of the country will become unsuitable for life within a generation.

The coalition has maintained a blockade that is claimed to be designed to prevent Iran from providing weapons and ammunition to the Saleh-Houthi alliance, but its primary impact has been preventing food and fuel imports, which the Yemeni people need to survive. Due to population increase, climate change, and other factors, Yemen depends on imports for the overwhelming majority of their fuel and basic staples — 90 percent of wheat and 100 percent of rice, tea, and sugar come from external sources.

The Hodeida blockade has the effect of starving the people living in the Saleh-Houthi controlled regions so that they rise up against them. Given how unsuccessful this policy has been elsewhere, one wonders whether its perpetrators simply want people to starve. Although geographically it makes up no more than 30 percent of the country’s total surface, these areas have the highest population density, holding 60 percent or more of the population.

The physical blockade complements the financial blockade that has stopped commercial importers from obtaining letters of credit to purchase supplies on the world market. In February 2017, food imports sharply decreased at all ports. The UN predicts that food supplies will likely run out within ten weeks, leaving the Yemeni people dependent on supplies smuggled in from Saudi Arabia and elsewhere — to the smugglers’ greater profit and the people’s worse starvation.

While the factions’ leaders are raking in profits from smuggling, the arms trade, “taxation,” and other means, the vast majority of the population now have no source of income and are facing desperate odds: of the seventeen million hungry people, seven million are close to starvation.

The thousands of young men recruited into the so-called security forces join them in hopes of providing basic necessities for their families. Their leaders may be Islahis, Salafis, Huthi, Saleh supporters, or Al Qaeda; most of the soldiers only want to care for their families. They are fighting and being killed in this pointless war simply to avoid dying of starvation.

For most people, the dreams of 2011 have been reduced to a single hope: the war will end, and they can return to a normal life of struggling against poverty and deprivation. A few still imagine a more equitable future. The factions leading the war are fighting for their own personal objectives. None of them care for the population’s welfare, introducing real democracy, or transitioning to a more equitable economy.